Sexy Serena Avatar pic removed from Twitter – but we have it! Sexy indeed. The photo showed Williams 29, in heels and some lacy lingerie. The curvaceous tennis star is concealed by a sheer curtain and leaves the rest to your imagination.

After she tweeted this last Thursday, the public went crazy and she was pushed to remove the pic. 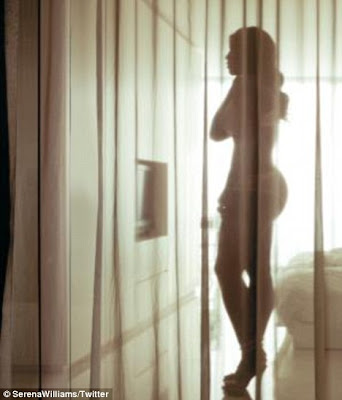 Well the big deal comes by the way of a man named Patenema Ouedraogo.

Patenema Ouedraogo! You heard me.

He was the man accused of stalking Serena this month and was actually arrested outside her Palm Beach Gardens estate.
Ouedraogo, was stopped by security as he tried to enter the subdivision. These are real security officers. They checked his license and found out that Serena had listed him as a stalker!

When they took him into custody, they found a love letter written to Tyrese Gibson stating:

“If by any means you can help or arrange any meeting with my dream soul mate, I’d like to confess to you that Serena Williams is the one I would do anything to meet and let her know”.

He confessed that he had followed her from her twitter updates. OH SNAP!

That’s exactly why you don’t get all “buck’ed naked” on twitter right?

Luckily Serena was in NYC attending the Met Gala so she was out of harms way that time. I guess Ouedraogo didn’t catch that tweet! Williams notified her security team of Ouedraogo so they knew all about him. Serena was and has been terrified of Ouedraogo who has been trying to get at her from every angle possible:

• He posed as a clothing promoter from Africa
• He rolled up in a Hollywood radio station and was mistakenly given access to her dressing room before getting discovered and escorted away.
• Now his latest attempt to roll up at her crib.

Although we might enjoy the shapely Avatar, there is no need in getting Ouedraogo all aroused! No pun intended.