Megan Fox Explains Why she’s Getting Rid of the Marilyn Monroe Tattoo.

It looks like The Notorious B.A.G (Brian Austin Green) is proving to be good for Megan Fox.

She made the decision to get rid of that huge Marilyn Monroe tattoo one her arm and to get her shapely figure back, two decisions that might be the smartest ones she made in a long time. 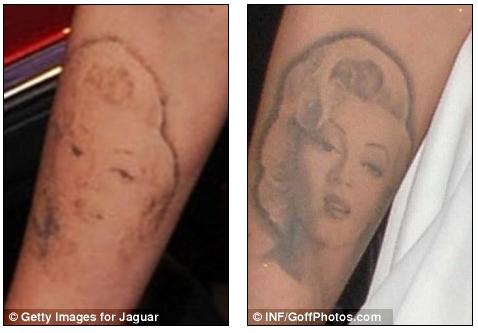 A long time ago when asked why she got the tattoo she said,

“I really admire Marilyn Monroe, but I would never try to emulate her. I got the tattoo as a warning. It warns me not to let myself be treated so badly by the film industry so that it breaks me down.”

Now her tune has changed.  She got deep with Italian Magazine Amica telling them that the tattoo had negative energy,

“I’m removing it, It is a negative character, as she suffered from personality disorders and was bipolar. I do not want to attract this kind of negative energy in my life.”

In another interview she gave a more straightforward answer,

“You outgrow things that you love when you were a child. I got it when I was 18 and now I’m 25 and it just doesn’t make sense anymore.”

B-I-N-G-O!  It’s silly and it takes up your entire right arm. But getting rid of it is easier said than done.  The actress states that it hurts more getting rid of a tattoo then getting it.

“It’s a hundred times worse than the tattoo itself, I’ve only done one [session] so I probably have three or four left.”

Now let’s see if getting rid of that negative energy will stop her from pissing everyone off and get her career back in gear!  …..#Imjust saying..