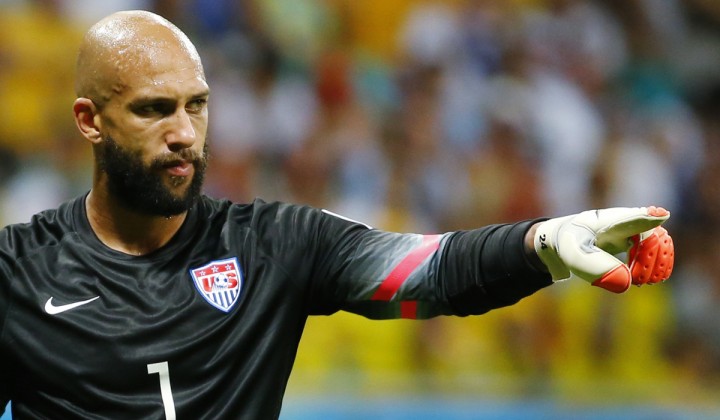 The Adweek Cover is one of those pictures that appeal to both men and women.  I’m not sure why he is on the cover of Adweek, but it will surely boost their sales this month, not to mention drive and insane amount of hits to their website.

During the interview for the cover, he is asked how it feels to have sudden fame this late in the game, but unknowing to us Americans who stop loving soccer at age 6…we are the late ones, not his fame.  He has been famous for quite some time, it’s us Americans who didn’t know about it.

He explains in the interview,

It’s not overwhelming for me in the sense that I play in England. In England, soccer is just mega—it’s huge. I’ve been there for 11 years. I’ve seen firsthand how people react. Obviously, in America, the nonsoccer fans have really taken notice of the sport with the World Cup. That’s been cool to see as an American who is trying to help grow the sport. 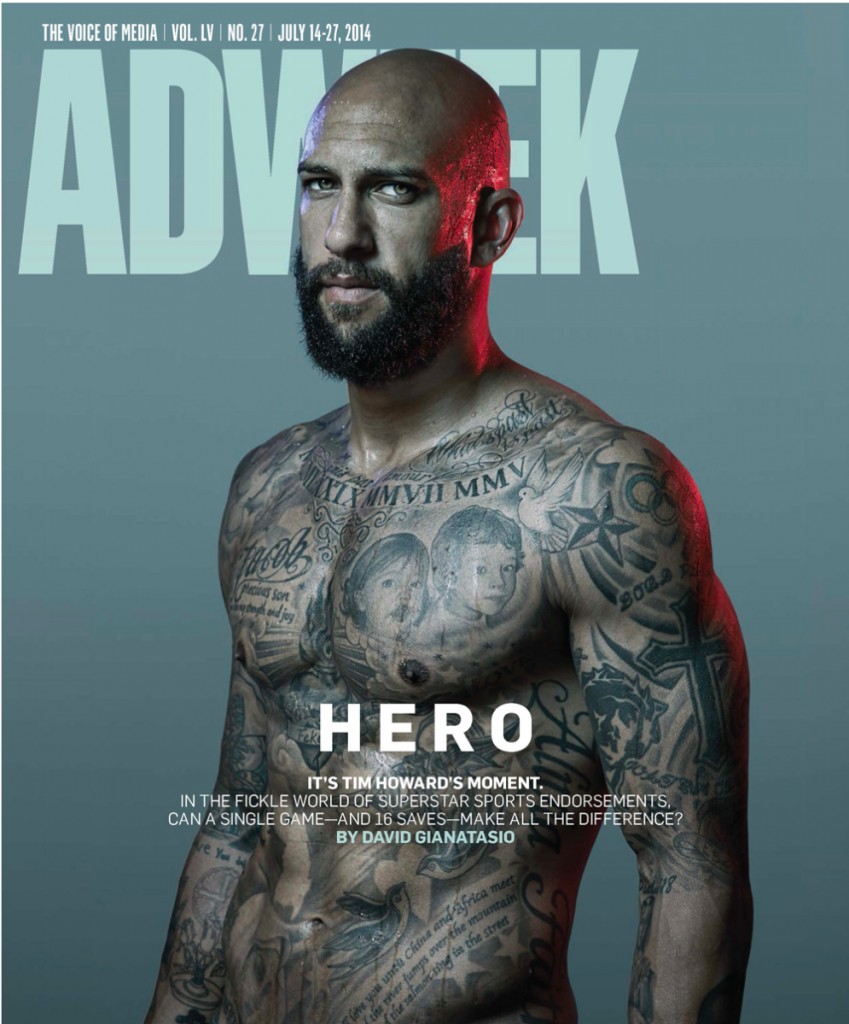 Of course we can’t just leave you with that – you can catch the entire interview  here at Adweek, but for our readers we decided to do some internet sleuthing, we now present to you…..

5 THINGS YOU DIDN’T KNOW BUT SHOULD ABOUT TIM HOWARD

5. HE HAS TOURETTES SYNDROME

The 35 year old has been living with Tourette’s his entire life.  He said that if he didn’t have it things would be weird.  During an interview he told Yahoo sports,

It’s something that I live with every day. For me now in my life, it’s like breathing for me. If I woke up and didn’t have Tourette’s syndrome, it would feel weird — not better or worse, just different. So I’m very happy and comfortable with it,”

He says that it acts up the more he gets nervous, especially before a big game.  He doesn’t curse uncontrollably like people like are depicted on TV, but he describes his symptoms as,

I may develop a pronounced twitch in one of my arms, or my neck or one of my eyes. It is usually very sudden. Sometimes I start coughing, or individual muscles contract.

However he says as the ball comes near him during game time, he can override the Tourette’s by pure adrenaline and concentration.  He is not medicated for the issue and uses meditation to deal with the symptoms.  There is a lengthy interview here at Spiegel.de.  (It’s better than the adweek piece)

4. HE ONCE SCORED A GOAL

In a game where he was playing for Everton, he kicked the ball the length of the entire field taking the opposing goalie by surprise, so much so the ball went in.  Guess What? We have the clip. You can see at the end of the video, he is not celebrating with the rest of the team as he genuinely felt bad for the opposing goalie.  He says, “You never want to see that happen, It’s not nice, it’s embarrassing.”

Here is the clip.

3. SOMEONE HACKED WIKIPEDIA TO MAKE HIM THE SECRETARY OF DEFENSE

Right after his game against Belgium, someone went into Wikipedia and pulled down Chuck Hagel’s picture and replaced it with Tim Howard’s.  Eventually the team at Wikipedia caught it but it was pretty funny. 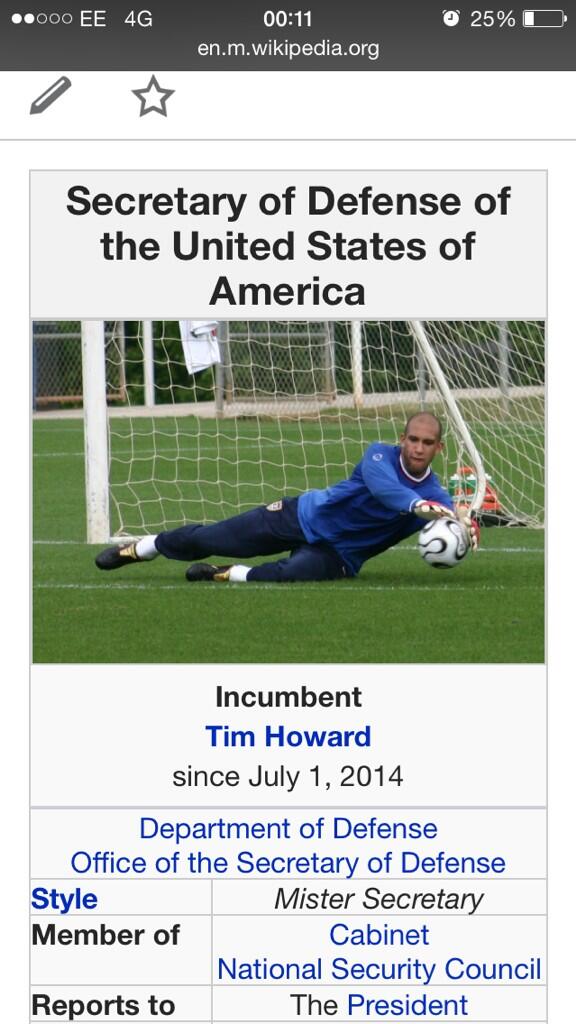 All the girls want to know what their competition looks like and all the guys want to know if who he is smashing is up to par. Well girls, he has set the bar pretty high, and guys he has indeed made us proud.  He is dating model Sara Mclean. She is a 2nd place 2011 Miss Scotland Pageant winner and was on the British version of Big Brother.  Did I mention, she happens to also be an investment banker…hmmm….. 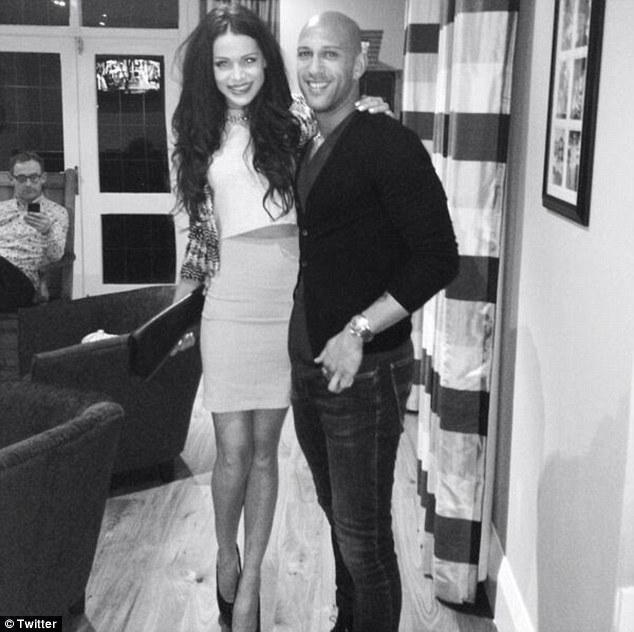 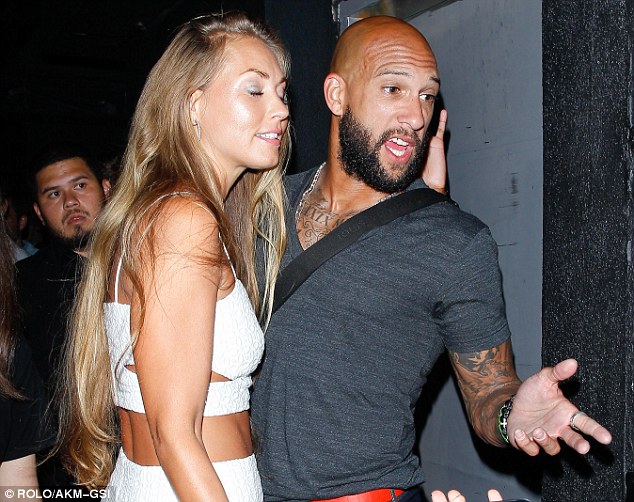 Also some pics of his ex-wife and kids…because I know you were wondering.  He and  Laura Cianciola Liebenrood married in 2003 and filed for divorce in 2010, which was granted in 2012.  They have 2 children together;  8-year-old son, Jacob, and daughter Ali, 7. 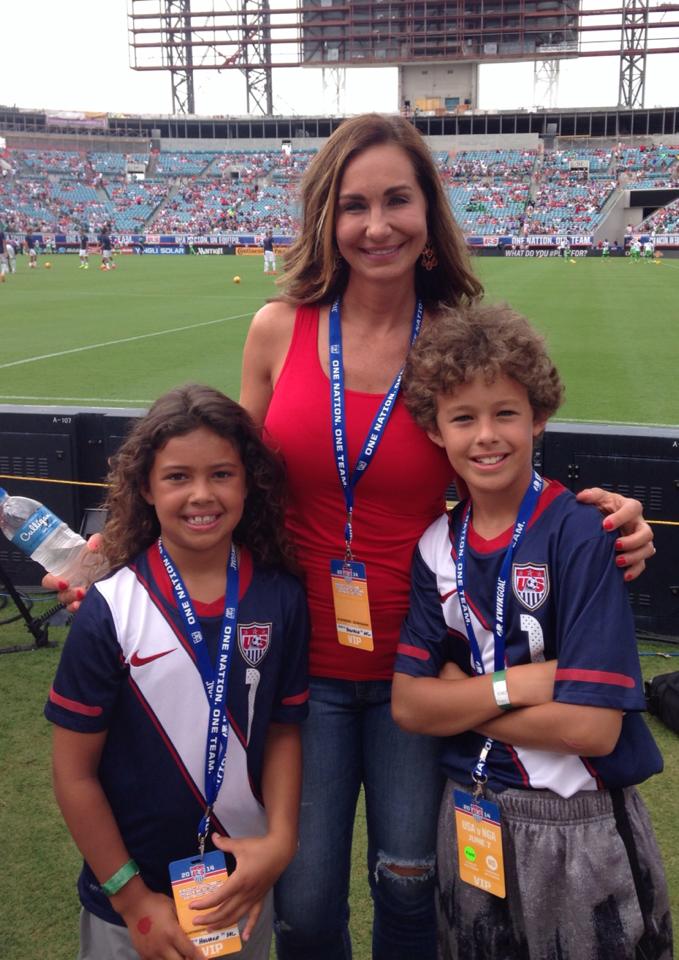 Don’t feel too bad for Laura. The reason her name is Laura Cianciola Liebenrood is because she has already remarried a man named Trey Liebenrood in October 12, 2013.  It appears that everyone gets along as Laura, Trey and Tim were all in the wedding party of a mutual friend.  (My internet troll game is on fleek)

1. HE HAS AN ANNUAL SALARY OF $3 MILLION PER YEAR

You know by now I’m obsessed with salaries and net worth!  Before his epic World Cup performance he signed a two year contract extension to keep him at Everton until 2018 – right up to the next World Cup in Russia.  Celebrity net worth has him worth a nice tidy $8 million.  We should see that number sky-rocket now that US sponsors are nipping at his heels.  In case you are wondering, there are professional goalies playing into their 40’s so he has a lot of good years left.

Now that was much better than just a hot photo, of a tatoo’d stud with abs, right?  (Please don’t answer that).

Lastly when asked about being a mentor and if he had advice to give, Howard says,

“Stay humble, stay grounded, remember what got you to that level—and that’s hard work.”