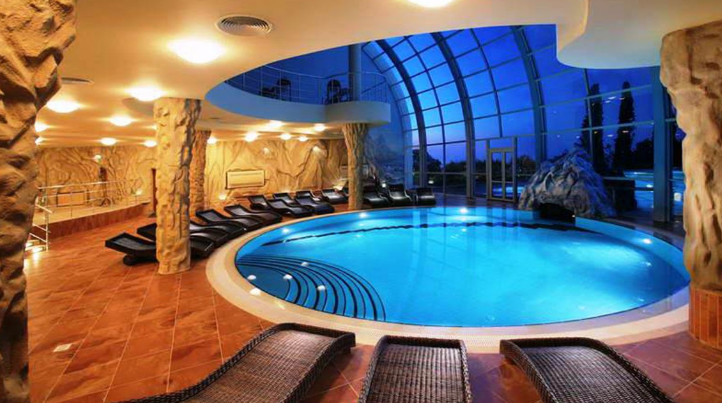 Reserve Your Spot Now: The 8 Most Luxurious Apocalypse Shelters It’s 2016. Scared and unqualified police officers are shooting innocent people. At the same time, scared and angry civilians are shooting innocent police officers. By this time next year, Donald Trump or Hillary Clinton will be the new President of the United States. We continue to abuse our planet and average global temperatures continue to rise as storms become more ferocious.

We’re shoving sausage and gravy inside biscuits, stuffing Reese’s Peanut Butter Cups with chopped up Reese’s Pieces candy, and Taco Bell is probably two weeks away from unveiling their new, “Taco Transformer” menu item which transforms into a literal piece of sh-t as you eat it.

The end is near, folks. It’s obvious. And instead of getting caught with your pants down after eating a Taco Transformer, you should probably be saving up your money so you can afford to spend your final days inside one of these lavish fallout shelters…

No. 8 – Vivos Europa One Shelter

Are you super rich and super paranoid? Do you want to get away from people like me who say ‘super’ too much? This is the place for you. You can reserve your spot in this five-star Vivos Europa One shelter for just $35,000 per person, so if you have a big family, your least favorite kid might have to sit this one out.

The facility has every single thing you could possibly want in a shelter for the apocalypse. Hot tubs, theaters, gyms, helicopter service, and several other completely unnecessary things no one will care about when they learn they’re the only ones still left on the planet.

Who do we have to thank for this beautiful creation? Vivos founder Robert Vicino. The company develops all kinds of fancy bomb shelters across the world, but this is probably their most impressive piece of property.

In 1991, cousins Ben Francisco and Gregory Gibbons decided to take a chance on an intriguing piece of property that sits quietly on Adirondack State Park land. You see, back in the late 1950s, the government built hundreds of underground silos that were home to Atlas-F missiles that could be ready to go in the event of a nuclear war.

Obviously nothing like that ever happened and they have since been abandoned. But the one location you see above has been turned into something truly special, thanks to Gibbons and Francisco. They spent 20 years renovating the place. The property now features a stone spiral staircase (which winds down 125 feet,) fireplace, Jacuzzi tub, an entertainment room, master bedroom suite, and a kitchen and a dining room.

It’s believed to be worth an estimated $1.76 million dollars.

Have you ever watched the Disney Channel original movie Smart House? If so, this is pretty similar, except this house is trying to protect you from natural disasters as opposed to making you breakfast and doing your laundry.

This incredible house was built by Al Corbi, the founder of S.A.F.E. (Strategically Armored & Fortified Environments) and it has five bedrooms, two panic rooms and a pair of “safe cores” that have the ability to seal off from the rest of the home. Oh and it also has freaking incredible views, a rooftop helipad, and a commercial grade pizza oven, because we all know pizza makes everything better.

It’s completely different from my home, which has been trying to kill me for years now. The other day, I turned on the ceiling fan for the first time this summer, and an old penny came flying off the blades. It nearly smacked me right in the head.

My house hired Abraham Lincoln to murder me.

This place is massive. It’s reportedly the largest billionaire bunker in the world. The 77,500 square foot underground bunker is the place you’ll want to be if some real sh-t does hit the fan. It can support its residents for up to 10 years, which is pretty damn impressive. The location of this private shelter was strategically chosen in Central Europe, in an “undisclosed rural area close to Prague and less than two hours from both London and Moscow by private jet.”

It has the best security features money can buy, and you also have the typical amenities that almost every shelter on this last has: gym, pool, spa, theater, a bar, game room, and even an underground garden with simulated natural light.

With a place like this waiting for them, the owners are probably praying for the end of the world.

Chill out, Dorothy. We’re still in Kansas. People (idk, are billionaires considered people?) are dropping over $4 million dollars for a tricked out penthouse in an underground condo community being built in Raven’s Ridge, Kansas. Unlike some of these shelters, you wouldn’t be lonely in this place. All the units are sold out and it can sustain 70 people for at least five years.

Inside, you’ll find a pool, a swanky library, a bar and of course on-site Wi-Fi. Just because the world is ending doesn’t mean you give up on your Instagram feed. #IsAnybodyOutThere #Like4AFollow #INeedConstantAttention #SocialMediaIsKillingUsAll #OneLove

Remember the Vivos company from #8 on this list? Well, they understand not everyone can afford their ridiculous shelters scattered around the world, so they’re offering to send you your own personal shelter. The Quantum shelters are portable steel capsules, and they’re designed to hold up against nearly any disaster you can dream of.

These capsules will be the trailer homes of the apocalypse. You won’t have a pool or a theater room, but you will have a small kitchen, bedroom and bathroom. One of the neatest features is the storage area that can hold up to a year’s supply of food.

It sounds like a Nicolas Cage film, but this home known as The Facility is the real deal. According to the reports, it can endure a 20-kiloton nuclear blast. I have no idea what that means; however, it sounds extremely impressive. You have a total of 12 bedrooms in four fully furnished apartments. You also have a theater and free Wi-Fi, of course.

In addition to the boring amenities listed above, this place also offers a 100-yard firearm range so you can get some practice in before the zombies arrive to eat your family. This place also has its own power plant, a workshop, conference center and a first-aid room.

This neighborhood might not be as safe as some of the other properties listed above, but it’s probably more reasonable for the world we live in right now. The unique neighborhood is located in Miami, Florida, and it’s been home to some people you have probably heard of before: Adrianna Lima, Beyonce & Jay Z, and retired Miami Dolphins’ coach Don Shula.

The neighborhood, which has a total of 40 homes, is guarded by a private police force 24/7. You can only enter the hood by a guarded bridge. Celebrities love it because you don’t have to worry about a paparazzo taking your photo while you check the mail in your Looney Tunes underwear.