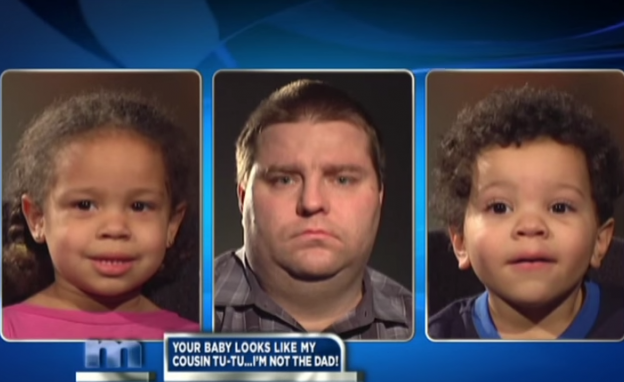 These days, you can just turn on the news and find all the depressing/crazy stories your little heart can take. The real world is basically a sick combination of The Maury Show, The Jerry Springer Show, and a special racist edition of Grand Theft Auto.

Back when Maury first blessed our television screens in 1991, the world was still a fairly normal place, so shows like Maury and Jerry Springer were a special treat. It was great entertainment, and back in the day the guests were believable.

But as the world slowly transitioned into a teaser trailer for hell, shows like Maury were forced to come up with these insane characters you see in the videos below. They had to somehow create situations that would shock the unshockable.

Is this dude legit? Or is he just acting? I have no idea, and I honestly don’t care. I want to make a documentary about this guy. I’ve never see someone so afraid of anything in my life. With how tall and heavy he is, you’d think he would be more worried about ceiling fans and narrow doorways.

Bruh…really? What the hell did he think happened during her pregnancy? She just ate a lot of milk chocolate or something? I bet you the card Maury was reading from didn’t even have the test results. Probs just read, “What do you think?”

This is one where you really hope they’re actors. If not, making fun of the poor guy seems a bit cruel.

My favorite part of this video is the audience member at the 1:00 mark. You can tell she’s thinking, “Oh sh-t. I picked the right taping! This bitch is crazy. I love white people.”

And then you have the guy at the 3:22 mark. It really makes you appreciate the studio audience. Maury and Jerry Springer would be nothing without them. It’d be like watching The Big Bang Theory without a laugh track.

This is one of the most-watched Maury clips, thanks to it being featured on The Soup two years after it originally aired in 2007. The clip was a hit online and it helped turn Alycia into one of the more popular memes the internet has seen.

There have been several remixes of the video. You can click here and here to watch two of our favorites.

Pretty much how I react when I walk in Chipotle and they tell me they’re out of guacamole.