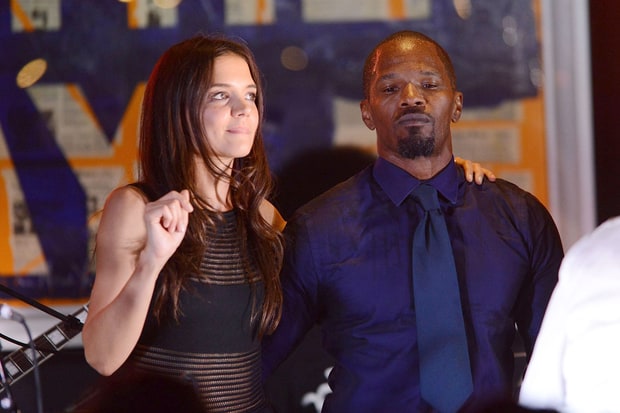 If you’ve been following the celeb gossip game, then you know that Jamie Foxx and Katie Holmes have had a little something going on for a few years now. They have tried their best to keep the “something-something” hidden, but we all know what’s going on.

Katie and Jamie have been getting their swirl on since at least 2013. One of the reasons they wanted to keep the swirltastic relationship a secret is because Foxx and Tom Cruise used to be good friends.

Another reason they wanted to keep it secret? Holmes was tired of all the attention from the public, especially after her very public divorce with Cruise. She needed a break from all the cameras and headlines.

But now it looks like being secretive has lost its thrill. Sources tell Us Weekly that Holmes is “tired of playing the hiding game,” and to prove this, the two stars ate dinner together at a restaurant in NYC. They weren’t trying to hide it. They were just there…enjoying life together.

The source adds that, “They’re going to go out to dinner more and are talking about a trip to Europe,” which sounds nice.

Especially when you consider what they were doing to hide their relationship. It sounds freaking exhausting…

“To make it impossible to get photo evidence that they are together, they traveled in cars with tinted windows and took secret back elevators. They had it down to a science.”