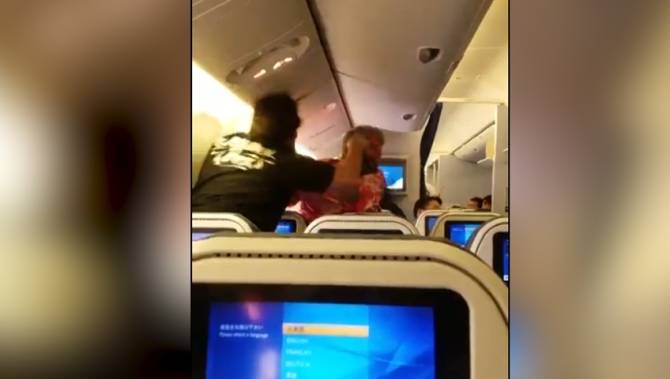 People Out Here Getting Crazy On Planes: A Brutal Fist Fight Breaks Out On Flight To LAX, Check Out The Crazy Video Inside! (VIDEO)

Forget being afraid of terrorists while on a flight, you should be worried about angry flight attendants, disgruntled passengers, and overworked pilots.

In the past month, it seems like there has been at least five or six videos released showing in-flight fights. The latest brawl happened on Monday on board a flight that was traveling to LAX from Japan.

The All Nippon Airways flight was about to depart when two passengers got in a nasty fist fight. According to the people on the plane, there was an argument between the two guys. No word on what the argument was about, but it must have been pretty heated because they started throwing punches.

At one point, a flight attendant is able to convince one of the guys to take a walk to a different area of the plane. But just a few seconds later he comes back for round two.

And that was a bad idea because he got popped in the mouth. We’re told one of the men was a 44-year-old American. He was removed from the flight and reportedly choked an airline employee on his way out. He was arrested for assault.

If you want more flight madness, check out the video below. This fight broke out between Delta passengers. Watch the poor pilot try to break it up…LOL! Ain’t gonna work, bro.