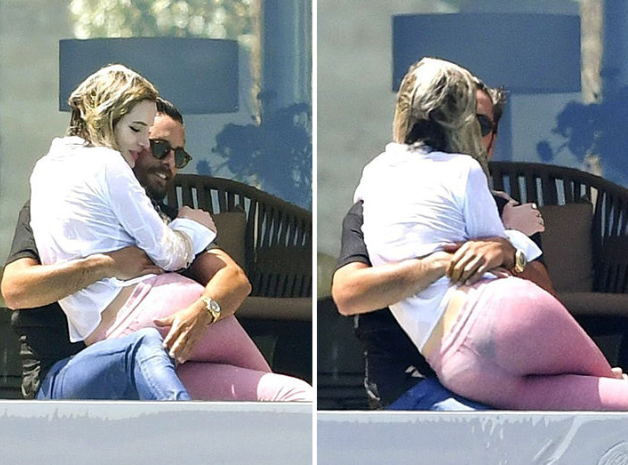 Remember earlier this month when we reported that Scott Disick and his baby mama Kourtney Kardashian were battling it out to see who could f**k the youngest model without breaking any laws? Well, it looks like Scott has won this battle, unless Kourtney steps out with some 18-year-old dude soon.

19-year-old Bella Thorne and 34-year-old Scott Disick flew out to the Cannes Film Festival together this week, and they were all over each other as they lounged on sun beds at a private villa.

In the photos below, you can see Disick getting some boob action while cuddling up next to the actress/singer.

The two stars first went public with their fling last week when they went out in Los Angeles together, and they were clearly not worried about privacy.

Why? Because they went to Catch, which is the most popular restaurant in town. The paparazzi just hang out there all night, and usually they will get something juicy. If you go to Catch, you expect to be seen by someone.

Sources say they looked “comfortable” together, and another source adds that they both like the attention.

“They are having fun together — partying and acting very flirty. There’s definitely chemistry, and they both seem to love the attention. It’s not like they’re hiding.”

Well, good for them? I mean, obviously they’re not going to stay together, so it seems like a complete waste of time. Scott is 34-years-old! It’s time he starts looking for a woman he can actually settle down with.

Or else he’s gonna be one of those sad, lonely 50-year-old men who still try to have sex with college chicks.