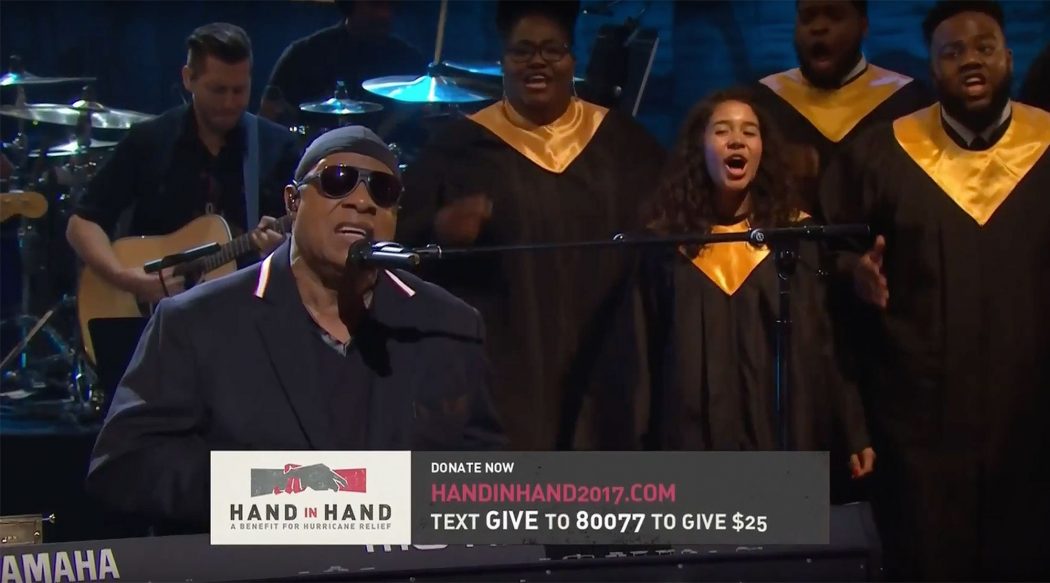 If you were home last night, you probably saw the Hand in Hand: A Benefit for Hurricane Relief telethon on every major network on TV. Almost every celebrity you can think of was at this event, including, two legends: Stevie Wonder and Beyonce.

Wonder kicked off the event with a special performance of Lean On Me, but before he started singing, he talked to the audience at home about love, racism and climate change.

“We’ve come together today to love on the people that have been devastated by the hurricanes. When love goes into action, it prefaces no color of skin, no ethnicity, no religious beliefs, no sexual preferences, and no political persuasions. It just loves. As we should begin to love and value our planet and anyone who believes there is no such thing as global warming must be blind or unintelligent. Lord, save us all.”

And he wasn’t the only one speaking out. Beyonce, who was born and raised in Houston, gave a heartfelt message to the people of her hometown.

“During the time where it’s impossible to watch the violence or racism in this country, just when you think it couldn’t possibly get worse. Natural disasters take precious life, do massive damage and forever change lives. In my hometown city of Houston, people need food, clothing and cleaning supplies, blankets, shoes, diapers and formula for babies and of course, clean water. Natural disasters don’t discriminate. They don’t see if you’re an immigrant, black or white, Jewish or Muslim, wealthy or poor. It doesn’t matter if you’re from Third Ward or River Oaks, we’re all in this together.”

That was just the first half of her message. The 36-year-old singer continued her powerful speech by talking about all the disasters happening around the world right now.

“The effects of climate change are playing out around the world every day. Just this past week, we’ve seen devastation from the monsoon in India and 8.1 earthquake in Mexico and multiple catastrophic hurricanes. Irma alone has left a trail of death and destruction from the Caribbean to Florida to southern United States. We have to prepared for what comes next so tonight we come together in a collective effort to raise our voices.”

In total, the event raised over $44 million for victims of Hurricane Harvey and Irma. It’s safe to say it was a huge success.