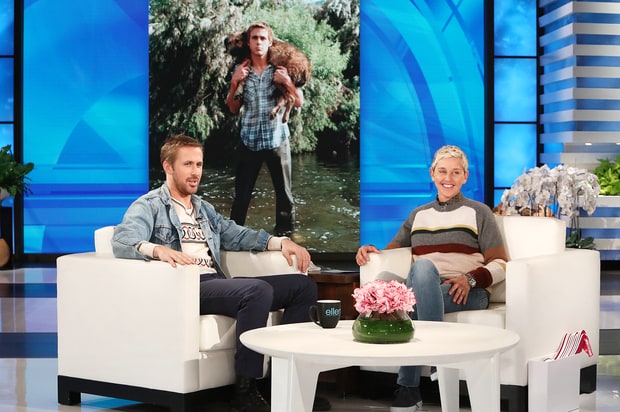 We all know dogs are a man’s best friend, and it’s clear to see Ryan Gosling’s dog George was definitely his best friend. This week, Gosling went on The Ellen DeGeneres Show, and he talked about losing his friend of 17 years.

George went with him everywhere. He traveled with the actor to almost every set, just so he could have a little piece of home with him no matter where he went.

“He was a good friend to me. It’s funny to say dog because I feel like there was something about George where I think he felt like being a dog was beneath him. He would not do tricks. If you wanted him to even sit down you had to convince him that it was in his best interest.”

Gosling wore George’s tag as a necklace during his appearance, and while hosting Saturday Night Live, he wore a shirt that paid tribute to George. Gosling joked that throughout the years, George aged like a freaking rockstar…

“George — as he started to age he started to look like an aging rockstar. He was sort of skinny fat, he had big hair, no teeth, some open sores, but still sexy.”

We hate to smack you in the feels on this glorious Friday morning, but let this be a reminder to go home and give your pets the attention they deserve. We are all they have, and in some cases, they’re all we have as well.