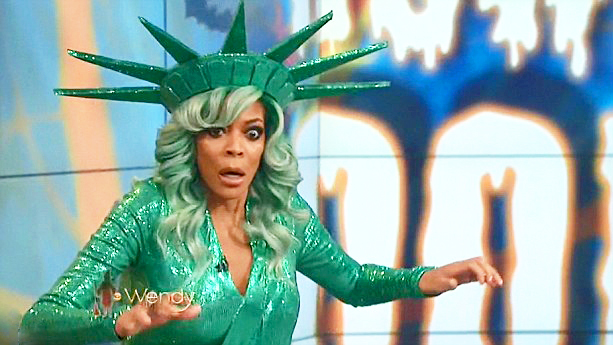 Wendy Williams Just Passed Out During Her Show, And It Was Truly Terrifying To Watch…WE GOT THE VIDEO!

Geez. Everything Wendy Williams does has to be dramatic, huh? She can’t even pass out like a normal person. The 53-year-old talk show host was filming her Halloween episode of The Wendy Williams Show, and she was in full costume as lady liberty.

As she was talking to the audience, her voice slowed down and started to sound a bit shaky, then her eyes got real wide (almost as if she saw a ghost) and then she stumbled around for a bit before dropping to the ground.

The broadcast went to black, leaving everyone wondering what the hell had happened. A few minutes later, Williams returned to the screen and said, “That was not a stunt. I overheated in my costume and I did pass out. But do you know what? I’m a champ and I’m back!”

You can check out the video below…

Now look, I’m not saying this was fake, but…IT LOOKS FAKE AS HELL. Oddly enough, I’ve seen several people pass out in my life, and it’s never once looked like that. Her eyes getting real big, she’s stumbling around, and then just instantly drops to the ground like a sack of potatoes?

It looked like she was starring in a play, where the action line for her character read, “Do the worst impression of someone passing out ever. Act like you don’t even know what it means to pass out. I want you to look like a damn fool out there on stage.”

And to her credit, Williams nailed the performance.

(side note: if she truly did pass out, we wish her all the best)