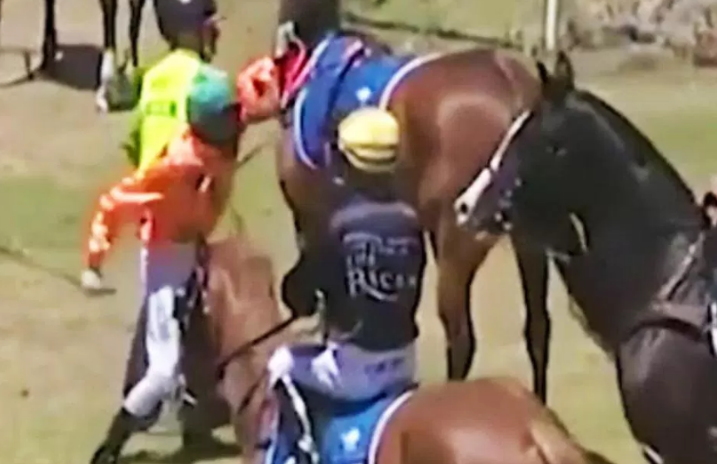 The Most Infuriating Video You’ll See All Week: Australian Jockey Suspended After Punching A Horse In The Stomach (VIDEO)

If you have anything breakable by you, this might be a good time to move it away from you, ’cause you’re definitely going to feel like breaking something after watching this video.

A 22-year-old Australian jockey named Dylan Caboche was attempting to mount a horse, but he was struggling trying to guide it to the starting gates. In a wave of frustration, Caboche jumps off the horse and punches it in the stomach. To make matters worse, he was still holding his whip, which means the punch doubled as a jab with the end of the piece of equipment. You can see the horse jump back in pain.

After watching the video, racing authorities gave Caboche a two-week suspension, which seems like a slap on the wrist to me. Thoroughbred Racing South Australia said in a statement that it “does not condone and will not tolerate such behavior.”

But a lousy two-week suspension kinda shows they do tolerate it. They should have banned him for life, and while they were at it, they should’ve put an end to their horse racing business completely. Who signs the horses up for this? Their mothers? Why would a horse want to spend its life carrying some douchebag on its back around a track? Especially when they get treated like this.

And it’s not like something like this hasn’t happened before. Back in September, jockey Davy Russell was given a four-day ban after punching a horse on the back of the head.