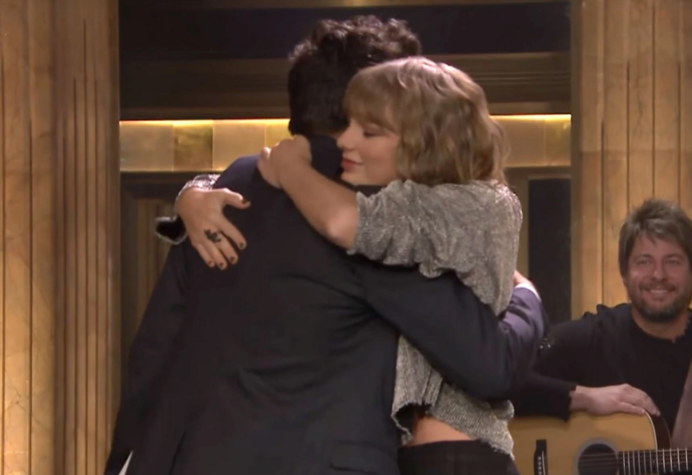 Jimmy Fallon’s First Day Back After Losing His Mother Was Extremely Emotional, Taylor Swift’s Last Minute Performance Makes Him Cry, And The Story Behind It Might Make You Cry (VIDEO)

Jimmy Fallon returned to the set of The Tonight Show on Monday, and for the first time ever, his mother would not be watching. She passed away inside a New York City hospital back on November, 4. Fallon canceled all shows last week to be with his family and friends.

He returned on Monday, and you could tell his mother’s spirit was sprinkled all over the set, ’cause a truly magical moment happened. Taylor Swift was the musical guest on Monday’s show, but she wasn’t scheduled to be. The producers wanted something special for their first show back, and they knew Swift was in town (because she just performed on SNL) so they asked her to make an appearance.

She said yes without even hesitating, and she surprised everyone by performing ‘New Year’s Day,’ which is off her new album, Reputation. It was her first live performance of the song. No one working on the show had heard it before, and that tidbit is significant because one of the lines in the song is, “You squeeze my hand three times in the back of the taxi / I can tell that it’s gonna be a long road.”

Why is that important? We will let Fallon explain…

This is why Swift’s performance made Fallon cry. You can tell he had been crying as he gave Swift a big hug after her performance. Some might call this a happy coincidence, but others might see it as one final gift from Fallon’s mother.

For a more detailed (and behind the scenes) playback of what went down, read what Tonight Show producer Mike DiCenzo wrote on his Twitter account…

“But at the desk, you could hear his voice break when talking about our musical guest Taylor Swift, and that’s because he knew what he was about to say… Jimmy’s words about his mom were beautiful. ‘Mom, I’ll never stop trying to make you laugh. I love you.’ I was crying. We all were. The story about his mom squeezing his hand 3 times to say ‘I love you’ when he was a kid, and then him squeezing her hand in the hospital – he hadn’t told any of us that story… More on that in a second. First, a quick word about Taylor Swift. She was not scheduled to do our show today. But we wanted something special for this first show back, so we asked her on a complete whim, since she had been in town doing SNL. She said yes with zero hesitation. She sang ‘New Year’s Day.’ No one had heard it. Suddenly she sings the line, ‘Squeeze my hand 3 times in the back of the taxi.’ I nearly gasped. Tears. I think everyone in the audience started sobbing.

I could see Jimmy silhouetted at his desk dabbing his eyes with a tissue. We all lost it. It was a beautiful coincidence in a beautiful performance. ‘Hold on to your memories, they will hold on to you,’ Taylor sang. That hug between Jimmy and Taylor after the song was 100% real emotion. Whatever you think of Taylor, she did something beautiful for Jimmy and our show today, and we’re forever grateful.”

Well…I guess I’m back to being a T-Swift fan.