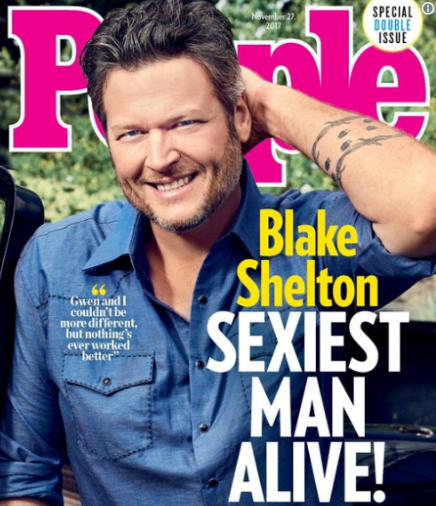 Blake Shelton Was Named Sexiest Man Alive, But People Aren’t Exactly Happy About It! Watch Shelton Read Some Mean (And Hilarious) Tweets About His Win (VIDEO)

In an announcement that shocked everyone, People magazine announced that Blake Shelton was the Sexiest Man Alive in 2017. It’s quite the honor for a 41-year-old country star with a beer gut.

The Voice coach/lucky spouse of Gwen Stefani had several people sending him love on the win. But he also had people sending him a lot of hate, and while waiting backstage at The Ellen Show, Shelton decided it would be fun to read some mean tweets from his favorite haters.

“Hey guys, Blake Shelton here and I’m backstage at The Ellen Show and I’m just wallowing, celebrating my People magazine ‘Sexiest Man Alive’ honor that’s been bestowed upon me. And I wanted to look at social media and see what’s being said out there by my supportive people. So I just wanted to read you some of my favorite mean posts.”

It may not be Jimmy Kimmel quality mean tweets, but it’s certainly the next best thing. By the way, past winners of the Sexiest Man Alive award include Dwayne Johnson, David Beckham, Chris Hemsworth, and Adam Levine, who is also a coach on The Voice.

There is something in the water at The Voice. I’ll lose my sh*t if Carson Daly wins next year. LOSE. MY. SH*T.