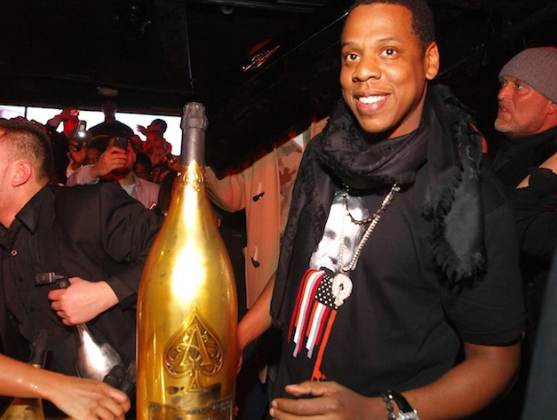 On Sunday (Feb 18) Jay-Z had himself one crazy night in New York City. He reportedly dropped $110,000 on Sunday to celebrate the birthday of his close friend Juan “OG” Perez, who also happens to be president of his company Roc Nation Sports.

The first stop of the night went down at Zuma, where Jay-Z treated Perez and a group of Roc Nation execs to a dinner that totaled over $13,000. From there, they went to uptown and jumped inside Made in Mexico. Sources say the 48-year-old spent more than $9,000 on drinks there.

The BIG BIG BIG money came later in the night, when the group of people was down to just six. They went to Playroom for their third stop, and Mr. Z went a little crazy.

“At the nightclub, they ordered — and paid full price for — 40 bottles of the Champagne owned by Jay called Ace of Spades. According to the outlet, Jay was spotted sharing the wealth and handing bottles out to other tables in the club. The lucky server who garnered a massive $11,000 tip at Playroom posted a picture of Jay’s check, which totaled $91,135, on Snapchat.”

Daaaamn, right? That’s a ridiculous total. That is rent, groceries, insurance, and multiple nights out on the weekend for 12 months…for normal people.

As we all know, Jay-Z ain’t normal. He’s a multi-millionaire rap legend. $91,000 is truly just change in his pocket. He probably wanted to get that sh*t out of his pockets. It was weighing him down. By the way, Jay-Z owns Ace of Spades, so he was basically investing in his own company with these purchases.