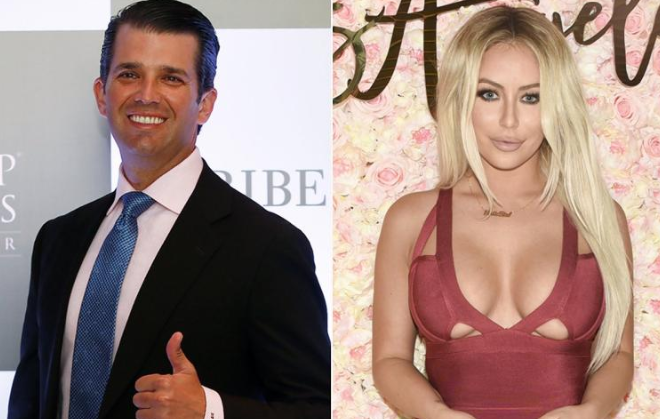 Arsenio Hall And Clay Aiken React To Aubrey O’Day’s Affair With Donald Trump Jr. During Celebrity Apprentice…THEY KNEW WHAT WAS GOING ON!

It might be shocking for us to learn that reality star/singer Aubrey O’Day had an affair with Donald Trump Jr., but it’s not surprising to O’Day’s co-stars during her season on Celebrity Apprentice.

Both Clay Aiken and Arsenio Hall were on season 5 of the show with her, and apparently everyone knew she had something going on with Trump Jr.

On Tuesday, Hall tweeted out the following…

The year @clayaiken … and I were on Celebrity Apprentice garnered great reality TV for NBC. But we both used to say that the GREATER show, was going on behind the scenes. https://t.co/72OiT0fBUL

Aiken decided to go a little more cryptic with his message by posting a GIF of himself saying, “She popped right out of her mama’s chatch and started grinding on the stripper pole.”

He did reveal that it was Trump Jr. who did the chasing. Not the other way around, which is what some people believe. I’m not sure why they would think O’Day just had to get herself a piece of Trump Jr., I don’t think anyone is waiting in line to sample that sausage.

My gut tells me the story got a tiny piece wrong. Maybe reverse those two names.

According to multiple sources, O’Day’s affair with Trump Jr. started at the end of 2011 after meeting on the set of Celebrity Apprentice. At the time, he had three kids with his wife Vanessa Trump.

An insider told Us Weekly the following…

“As far as what Don told Aubrey, he was done with Vanessa. He already started putting things in place, like setting up a place in NYC to live. Don would talk to Aubrey about how he was miserable in his marriage and how Vanessa was so controlling and paranoid about him leaving. In his mind, he was going to be separated with Vanessa and be with Aubrey.”

The affair ended in 2012. We’re not sure if Vanessa found out and they tried to work through it, or if she just found out more recently. Either way, their marriage is over. They announced their decision to separate on Thursday, March 15.

It’s a good situation for Vanessa. She will get a lot of money in this divorce and she will no longer have to pretend to enjoy having sex with Trump Jr.