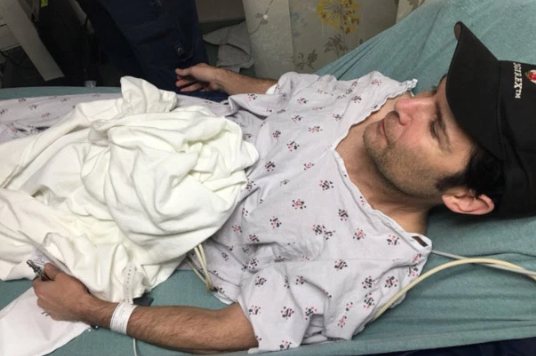 Corey Feldman Drives Himself To The Hospital After Being Stabbed Multiple Times, But Cops Say There Are No Lacerations…HUH?

IM IN THE HOSPITAL! I WAS ATTACKED 2NITE! A MAN OPENED MY CAR DOOR & STABBED ME W SOMETHING! PLEASE SAY PRAYERS 4 US! 🙏🏼🙏🏼 THANK GOD IT WAS ONLY MYSELF & MY SECURITY IN THE CAR, WHEN 3 MEN APPROACHED! WHILE SECURITY WAS DISTRACTED, W A GUY A CAR PULLED UP & ATTACKED! I’M OK! pic.twitter.com/TZ0ppZeEWN

I think it’s certainly safe to say that Corey Feldman had an interesting night on Tuesday. On Wednesday morning, he jumped on his Twitter account and posted the message and photos you see above.

He’s in the hospital, surrounded by doctors. In the tweet, Feldman claims he was stabbed multiple times, “I’m in the hospital! I was attacked 2nite! A man opened my car door & stabbed me w something! Please say prayers 4 us,” he wrote in all caps.

@LAPD R CURRENTLY INVESTIGATING THE CASE AS AN ATTEMPTED HOMICIDE! I HAVE HAD MOUNTING THREATS ON ALL SM PLATFORMS BY THIS VILE “WOLFPACK” & THIS IM SURE IS A RESULT OF THOSE NEGATIVE ACTIONS! I HAVE REASON 2 BELIEVE ITS ALL CONNECTED! ENOUGH IS ENOUGH! HOW SICK R THESE PPL?!?

The only problem with all this is that the LAPD is reporting something entirely different. They claim they never considered it an attempted homicide because he had no visible lacerations.

But that’s not to say Feldman made up the entire thing. Police do believe an unknown suspect opened the actor’s car door at a stoplight and “jabbed at Feldman with an unknown object.”

No one knows what the object was. It could have been a flower for all we know. The LAPD confirmed Wednesday morning that Feldman was released from the hospital. Recently, he has been asking for donations to hire extra security because he is constantly fearing for his life.

“Prior to the alleged stabbing, Feldman requested donations to hire extra security because he feared for his safety amid his efforts to expose child sexual abuse in the entertainment industry.”