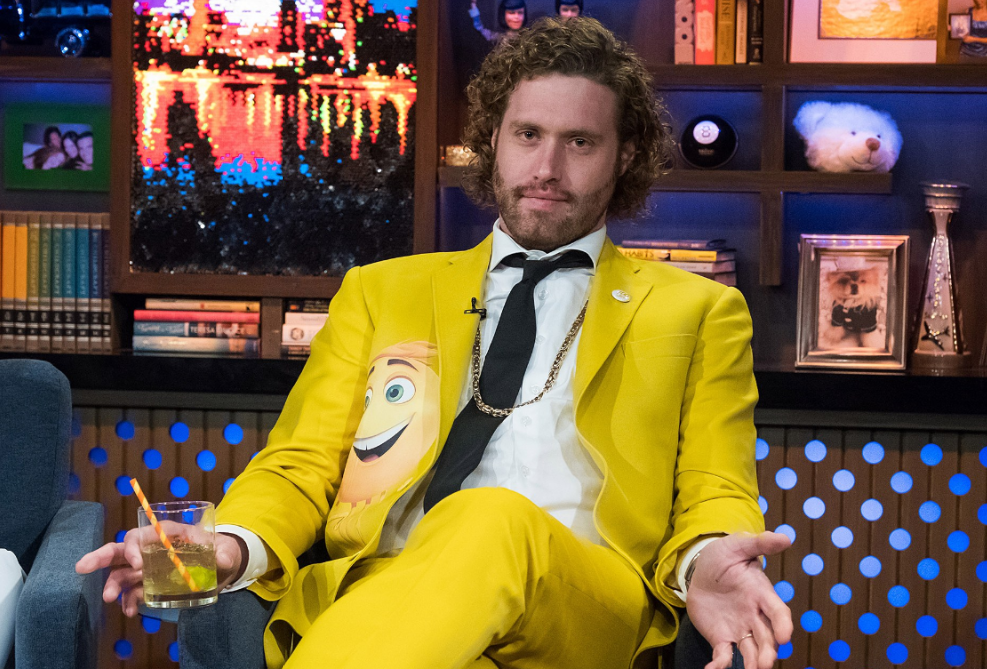 T.J. Miller Arrested And In Serious Trouble With The FBI After Calling In A Fake Bomb Threat (VIDEO)

It seems like T.J. Miller has been in a bit of a downward spiral recently. He’s been acting even stranger than usual, and after he was let go from Silicon Valley, reports came out claiming he was a disaster on set.

It looks like alcoholism might be the cause of it all, and he better get some treatment because now he’s in trouble with the FBI. Back on March 18, Miller was riding an Amtrak train from D.C. to NYC, and during the ride he called 911 to report a woman with brown hair and a scarf. He claimed she had a bomb in her bag.

“An Amtrak police officer called back Miller who added … the woman kept checking the bag and seemed to want to get off the train and leave it behind. The officer asked Miller if he suffered from mental illness … which he denied, and said, ‘This is the first time I’ve ever made a call like this before. I am worried for everyone on that train. Someone has to check that lady out.'”

Miller ended up giving authorities the wrong train number, which meant a different train in Connecticut was stopped and evacuated, causing massive delays.

When investigators looked into this, they discovered that Miller was later removed from his train because he was so intoxicated. A train attendant revealed the actor/comedian had two glasses of wine and two double Scotch and sodas.

“The attendant also reported Miller had ‘exchanged profanity’ with a woman in the First Class car — and he did not back up Miller’s account of the woman’s suspicious behavior. The woman told police Miller was being loud and belligerent on the train, and had made a comment about her hair. She admits they had an argument. After speaking to all parties involved, cops determined Miller had a grudge with the woman — and made the false report about her having a bomb as a result.”

Okay, so now that you know the backstory, we can tell you that FBI agents arrested Miller Monday night (April 9) at LaGuardia Airport. He was booked for providing false information or pulling a hoax with federal authorities. He was released from custody a short time later on $100,000 bond.

Last we heard, Miller is still planning to attend his stand-up shows this weekend, so I guess he’s not too concerned about this whole thing.