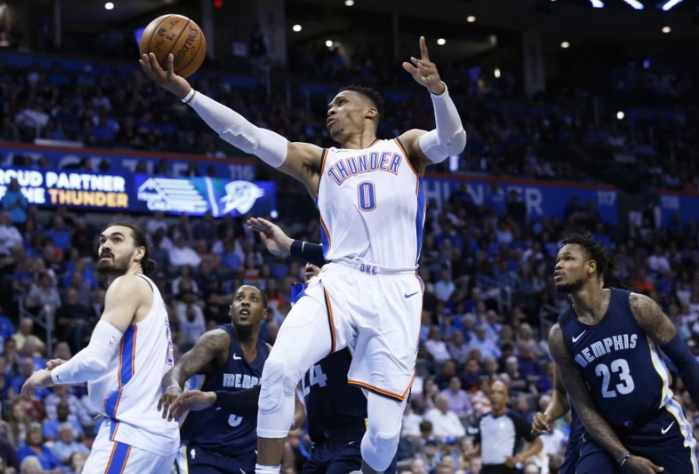 Did he just say “Westbrook is out of his cotton-picking mind”?….. pic.twitter.com/fvPZ5cTkjx

Russell Westbrook had himself one hell of a game on Wednesday night. He got the 16 rebounds he needed to average a triple-double for a second straight season. He’s the first player in NBA history to accomplish this.

And it’s safe to say, Oklahoma City Thunder announcer Brian Davis was extremely excited. During one of Westbrook’s 19 assists, Davis said in a very excited tone that Westbrook was “out of his cotton-picking mind.”

Now obviously he wasn’t trying to use the phrase in a derogatory manner. He meant that Westbrook was bringing down the house, playing the game of his life.

But anytime you use a phrase like that, it’s going to be offensive. It doesn’t matter how you mean it. It’s just like when some white dude says the N-word while rapping. He’s probably not a racist, but he’s obviously incredibly ignorant.

And that’s where Davis stands. He’s been Oklahoma City’s play-by-play voice since the franchise started back in 2008, and now he’s probably wondering if this mistake will get him fired. There are certainly a lot of people on Twitter calling for him to be fired, or at least punished for the comment.

Dan Mahoney, the vice president of broadcasting for the team, sent out the statement you see below:

“We think obviously the use of that term was offensive and inappropriate, and I expressed that to Brian last night. Brian assures me that it was not meant in any derogatory way, and he apologizes. But again, we feel strongly that it’s inappropriate and offensive.”

I’m not sure what the appropriate punishment is here. What do you think? Should he be suspended? Forced to attend some classes/training? Or is an apology enough?