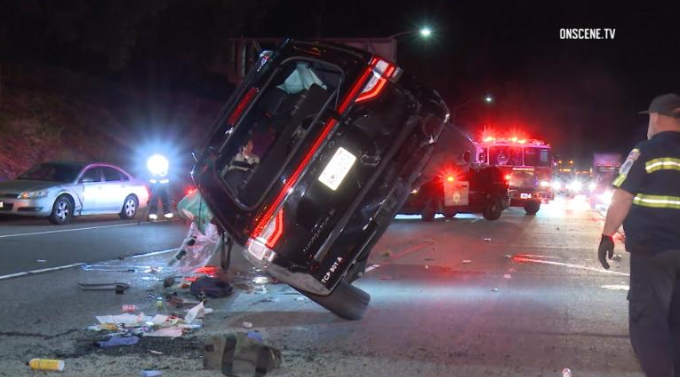 Will Ferrell Hospitalized After Flipped-Car Crash In Orange County, We Got Video Of The Crash Scene Plus An Update On His Condition! (VIDEO)

We almost lost a comedy legend on Thursday night. Will Ferrell was traveling back to his home in Los Angeles following an event in San Diego earlier in the night. He was in a 2017 Lincoln with Funny or Die’s Andrew Steele, a 27-year-old woman (possibly an assistant?) and his 62-year-old chauffeur.

They were driving in the high-occupancy lane on Interstate 5 in Orange County when a vehicle being driven by a 22-year-old male veered to the left and hit the right rear of Ferrell’s vehicle, which caused it to veer left and hit the center of a divider median. The vehicle then flipped on its side.

Ferrell was seen being loaded into an ambulance following the accident, but he was talking on his cell phone and didn’t appear to be seriously injured. We’re told the only person who was seriously injured was the 27-year-old woman, and that’s because she wasn’t wearing a seat belt. No word on how bad her injuries are.

A rep for the comedian told TMZ that he was released from the hospital and didn’t suffer any “significant injury.” It’s still unclear what caused the 22-year-old driver to hit Ferrell’s vehicle, but we’re sure a full investigation will take place.

The event Ferrell attended in San Diego was with Billy Eichner, and when news of this crash was released, many people believed Billy was in the vehicle as well.

Yes I’m ok. I wasn’t in the car. Will and everyone are ok. Very scary but very thankful everyone is ok. ❤ https://t.co/6bxeHXY9Ts