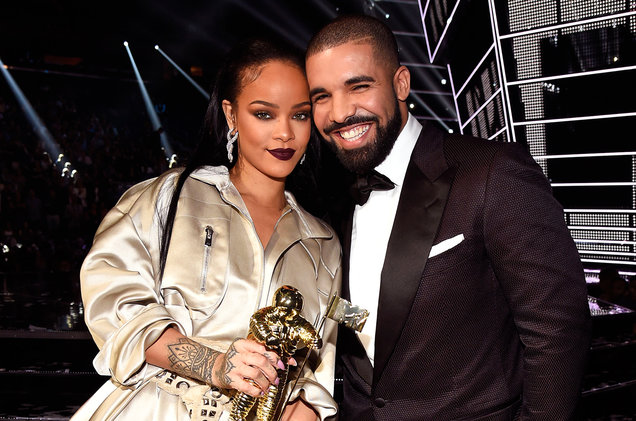 Rihanna Puts Drake On Blast, Says She Is No Longer Friends With Him And Admits His 2016 MTV VMAs Speech Made Her Uncomfortable!

Poor Drake. We all know he was (and possibly still is) in love with Rihanna. At one point, years ago, they tried to make a relationship work, but it didn’t last long. And it was clear to everyone that Drake was having a hard time only being friends with Rihanna.

You’ll remember back in 2016 when Drake presented her with the Video Vanguard Award at the MTV VMAs. During his speech, he admitted he had been in love with her since he was 22, and when he went in for a kiss, she swerved on him a bit.

Now, thanks to a recent interview with Vogue, we are learning that Rihanna was extremely uncomfortable during Drake’s speech.

“The VMAs is such a fan-focused awards show, so having that energy around me, and knowing the people who had received the award in the past, made it feel like a big deal. Waiting through that speech was probably the most uncomfortable part. I don’t like too many compliments; I don’t like to be put on blast.

We don’t have a friendship now, but we’re not enemies either. It is what it is.”

You know, it’s a sad situation. It truly sounds like Drake still had feelings for her and he couldn’t let it go, which made her uncomfortable and led to the end of their friendship. It’s a shame because they worked so well together.

For those who don’t know, Rihanna is currently in a relationship with an extremely wealthy Saudi businessman named Hassan Jameel. No word on how serious their relationship is, but she’s 30-years-old now, and the way she’s talking, it sounds like she’s getting ready to settle down.

She out here talking about babies and sh*t…

“OK, so now that I’m 30, are there things I’m supposed to do? Should I be worried? Should I be freezing my eggs? What do you do at 30?! I’m not gonna be able to take my eyes off my kid. I know that already about myself. They’re going to have to force me to hire a nanny.”