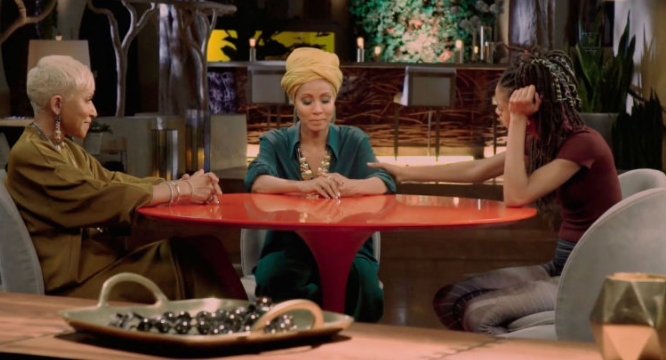 Jada Pinkett Smith obviously doesn’t know her daughter as well as she thinks. During the latest episode of their Facebook Watch talk show Red Table Talk, Jada asked Willow Smith what her biggest loss has been so far.

The 17-year-old artist shocked her mother when she revealed her darkest time came at around the age of nine. It was right after she released the smash hit ‘Whip My Hair,” she was lost and wasn’t sure what to do with herself.

“I would have to say I honestly feel like I lost my sanity at one point. It was after that whole ‘Whip My Hair’ thing and I had just stopped doing singing lessons and I was kind of just in this gray area of, ‘Who am I? Do I have a purpose? Is there anything I can do besides this?’

After all of that kind of settled down, I was listening to a lot of dark music and it was just so crazy and I was just plunged into this black hole and I was, like, cutting myself and doing crazy things.”

Jada was shocked by this. You could see it on her face. She asked her daughter, “What? When were you cutting yourself? I didn’t see that part. Cutting yourself where?”

Willow showed her mom some scars on her forearms and wrists…

“There’s still a little something there. Totally lost my sanity for a moment there. I never talk about it because it was such a short, weird point in my life but you have to pull yourself out of it. I honestly felt like I was experiencing so much emotional pain but my physical circumstances weren’t reflecting that.”

Let this be a good reminder for all you parents out there. Check up on your kids, and if they brush you off with, “Ugh. Everything is fine!” don’t just accept that answer. Make sure they understand that you really do care.

The good news for Willow is that it’s been five years since she’s self-harmed, and she recognizes now how unhealthy it was.