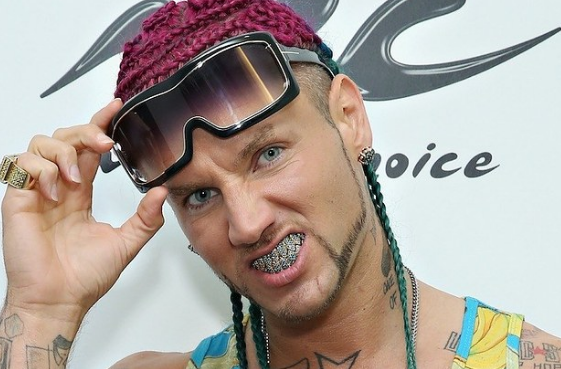 Rapper Riff Raff Accused Of Rape And Now His Tour Has Been Canceled!

You can’t judge a book by its cover. We all know that. However, if you take one look at Riff Raff, you’ll immediately get, “Oh sh*t. I bet he has raped someone” vibes. I’m not saying it’s right to think that, I’m just telling you how his face makes us feel.

The 36-year-old rapper was all set to start a tour in Australia and New Zealand, but it was canceled at the last minute after a woman by the name of Eliza Stafford accused him of rape.

In a public Facebook post, Stafford wrote about the horrific event that happened at one of Riff Raff’s concerts back in 2013…

“I went to his show because my boyfriend at the time was a huge fan. My boyfriend was with me at the concert. I was asked mid-show to come backstage, and as a 19-year-old I was flattered and complied.”

Once backstage, she was offered a shot from a vodka bottle that was sitting on the table. She took a shot, but it turned out to be codeine syrup.

“I don’t remember anything from that point. A couple of my friends were at the concert and when I didn’t come outside from backstage, asked what had happened. Another girl who had been backstage with me told them that I had been coerced to get in to a car with Riff Raff and his support act. She didn’t do anything.”

She woke up to Mr. Raff pulling out of her and getting into the shower. She crawled out of his hotel room, got a taxi and went back to her boyfriend’s house.

So why is she just now coming forward? Well, because she found out that Raff was scheduled to perform at a venue less than half a mile from her home.

“We have been made aware of allegations made against Houston rapper Riff Raff. Audiopaxx takes these matters seriously and does not condone any of this alleged behavior. In light of this, we have spoken to his management team and the scheduled tour of Australia and New Zealand has been canceled, effective immediately.”