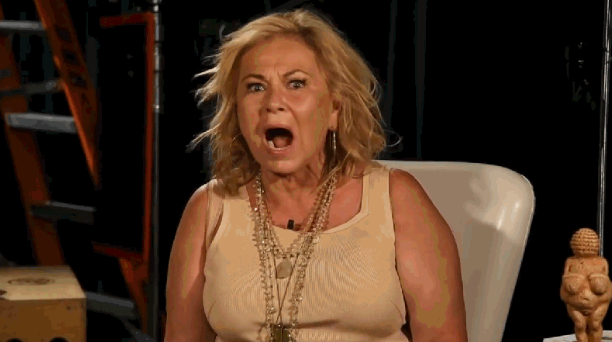 We have no idea what is going on with Roseanne Barr. She’s either a woman who is legit losing her mind, or she’s a woman trying to hold on to the little bit of fame she still has.

You all know about the racist tweet she posted about Valerie Jarrett back in May. The tweet was so damaging that ABC canceled the Roseanne reboot, which was huge news because it got them their highest rating in years for a sitcom. Weeks later, they worked out a deal to bring back a spinoff called ‘The Conners,’ which will not feature Roseanne.

Roseanne has appeared on a few small podcasts since the incident, and she seemed apologetic for her actions…kinda. She goes back and forth.

But the recent video she posted to her YouTube channel, well, it’s insane. In the video, she’s talking to a reporter who is asking her some ridiculous hypothetical question about a presidential scandal. After the question drags on, Roseanne snaps and starts screaming, “I’m trying to talk about Valerie Jarrett…”

Is this video real? Who knows. It certainly seems like an odd thing to post. I could see this being real if this was a clip from an interview with CNN or something. But the fact that she posted this clip to her own YouTube channel makes me suspicious.

But then again, if you’ve watched the Roseanne show, you know she’s not that great of an actress…