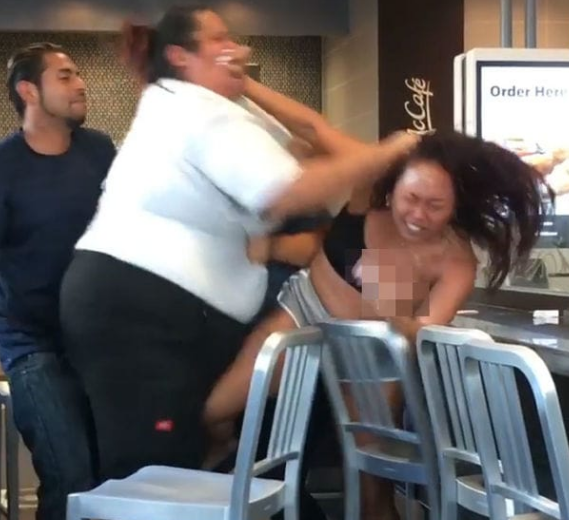 We have seen some wild sh*t go down inside McDonald’s before. You got people having sex inside the store, people getting hit with chairs, etc. The only two restaurants that have more violence than McDonald’s are Waffle House and IHOP. Something about breakfast food gets people going.

On Wednesday, a brutal fight took place inside a McDonald’s between an employee and a customer. According to the hero who shot the video, the customer tried to use a water cup to sneak soda from the fountain machine, which is something 95% of us have done at least once.

But the employee (aka the giant) you see in the video wasn’t having it. An argument started, and when the customer tried to hit Goliath with a tray, sh*t got real.

This monster absolutely destroyed the customer. It was like watching Godzilla demolish an entire city. I mean, she could have killed the girl if she really wanted. She threw her around like a rag doll.

SHE HIT HER SO HARD THAT HER BOOB FELL OUT! THAT’S HOW HARD SHE HIT THIS WOMAN! SHE ALMOST LOST A BOOB!

According to TMZ, corporate has seen the video and they’re currently investigating the situation. It’s likely this employee will get fired, but that’s okay. She’ll probably be hired as a security guard after this video spreads.