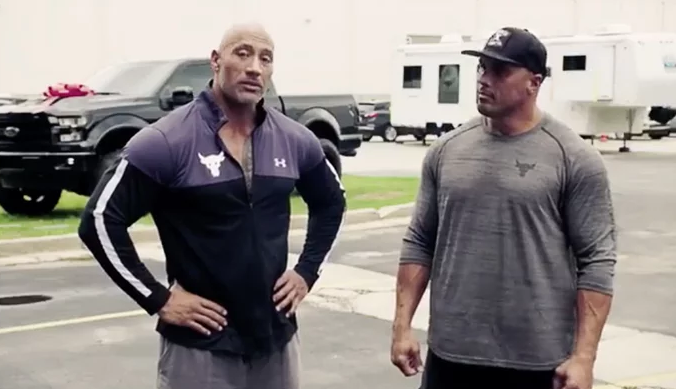 Whaaat? We finally have a story that will make you smile instead of roll your eyes? Yeah, we’re shocked too.

Apparently, there are still some decent people out in Hollywood, and Dwayne Johnson is one of those decent people. The 46-year-old movie star surprised his stunt double (who also happens to be his cousin) with a custom truck for all his years of hard work.

His cousin, Tanoai Reed, had just returned to work after an injury and thought he and Johnson were simply filming a behind-the-scenes clip for the movie.

Little did he know he was actually about to receive a badass gift from “Dwanta Claus.”

As you can see, he was truly shocked…

The first time they worked together was in 2002 for The Scorpion King, and since then, he has doubled for Johnson in at least 20 films, including Jumanji, Rampage and The Fate of the Furious.

“Seventeen years of him giving his blood, his sweat. I mean, this is a small token of my appreciation. Over the course of my career, my stunt double (and cousin) Tanoai Reed has broken multiple bones, severed tendons, torn ligaments & just been an overall dominating badass achieving several ‘Stuntman of the Year’ honors.'”