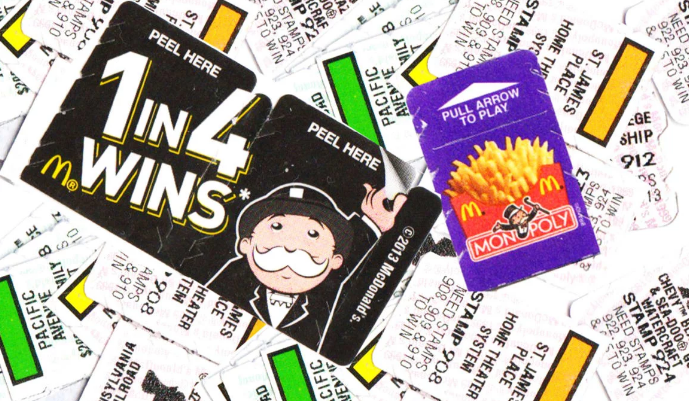 The Insane Story Of How The McDonald’s Monopoly Game Was Rigged By An Ex-Cop For 12 Years!

Let’s be honest, we’ve all played the McDonald’s Monopoly game. I remember when I was 16, I ate McDonald’s almost every single day to collect pieces. I’d only order items that came with Monopoly pieces, I’d ask friends and family to give me their pieces. I even thought about traveling to different cities, thinking they only released certain pieces regionally.

The only thing I’d ever win was free food, as if killing yourself slowly with greasy a** fries is a prize. But it turns out, I was playing the game all wrong. I didn’t have the right connections.

For 12 years, the game was rigged by a former cop named Jerome Jacobson. He was known as ‘Uncle Jerry’ and he got involved in the Monopoly fraud while he was working as director of security for Simon Marketing, the company that produced the game pieces.

Jacobson started by helping out his friends and family by giving them those rare pieces. He then widened his circle after finding out that McDonald’s was intentionally keeping winning pieces out of Canada. He thought to himself, “Well, they’re already cheating the system, so who the f**k cares?”

And from there, he had mobsters, psychics, strip club owners, convicts, drug traffickers, and even a family of Mormons participating in the fraud.

In total, they all had falsely claimed more than $24 million in cash and prizes.

“By the end of 1998, Jacobson had become Rich Uncle Pennybags, and America was his game board. He tooled around the United States stealing almost all the big-ticket game pieces, acquiring new properties on a whim, and collecting kickbacks from other players. Now he was hanging out with powerful Italians, he dressed in sharp suits and sometimes used the name ‘Geraldo Constantino.’ He and his wife moved into a fine red-brick home in Lawrenceville, Georgia, where he tended to its perfect lawn.”

You can click on this link to read the full article, and I suggest you do that at some point. It’s a truly fascinating story that will probably be made into a movie one day.

By the way, an FBI sting operation discovered Jacobson’s fraud in 2001 and he was sentenced to 37 months in jail. He was also ordered to pay $12.5 million in restitution.