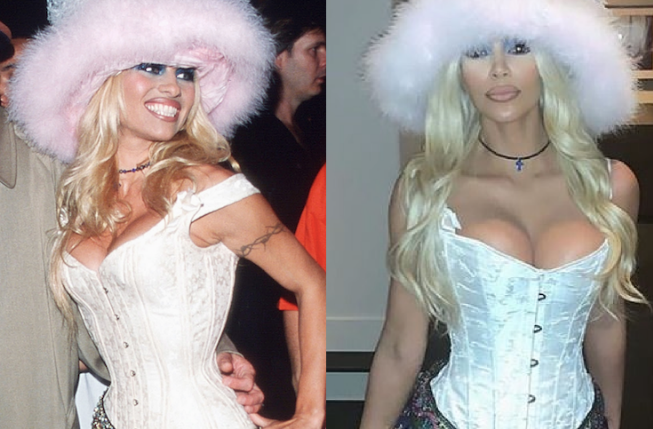 Kim Kardashian Dresses Up As Pamela Anderson For Halloween, Then Calls People “Retarded” For Not Knowing Who She Was

For Halloween, Kim Kardashian decided to dress up as Pamela Anderson, which basically just required a blonde wig. I mean, they both have huge breasts, big lips, and they both had a sex tape that was released online. Kim’s imagination must be limited.

But whatever, she did it, and she showed up at Kendall Jenner’s Halloween party ready to steal the show.

Sadly, the younger crowd didn’t know who she was. During an Instagram Story, Kim talked to the camera, “Nobody knew who we were,” she then added that everyone was “too f**king young.”

Later in the clip, she talks to her former assistant Stephanie Shepherd and says, “Nobody knows who I am. Yeah! Retarded.”

That’s right, she pulled out the R-word. This obviously upset a lot of her fans. If you don’t remember, Khloe used the word back in July during a livestream and was forced to apologize soon after.

“Ugh I hate that word! Why did I even say that? You are  a million percent right and I actually greatly dislike when people use that word! I will do better! I am sorry! Much love today.”

Kim hasn’t apologized for her usage of the word, and who knows, she might ignore it. For what it’s worth, I don’t think using the word makes her a bad person. I just think it shows lack of intelligence. I’m sure they use that word all the time when the cameras aren’t rolling. She goofed and let it slip last night.