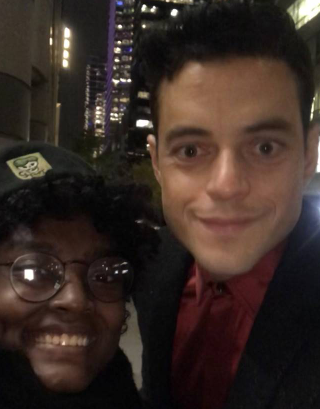 You might know Rami Malek from the wonderful USA Network show, Mr Robot, or maybe you know him as Freddie Mercury from the upcoming Queen biopic. He’s a pretty talented actor with a busy schedule, especially right now as he promotes the film around the world.

Earlier this week, a fan went viral by sharing an incredibly awkward video she accidentally filmed with Malek. The 19-year-old fan, Xan Black, stopped Rami in the street and asked him if he could say hello to her friends real quick on camera.

He denied her request by saying, “No, but we can take a picture, is that alright?” and by that time, he realized she was already recording, and the video ended soon after that. It was super weird.

Black tweeted the video with the caption, “THIS IS PROBABLY THE MOST EMBARRASSING THING TO EVER HAPPEN TO ME!”

The clip went viral and was viewed over 3 million times, and it seems like everyone is split. Some people say Rami came across as rude while others say he was rather polite and you can’t expect him to take videos with everyone.

And we have to agree with them. He wasn’t rude about it. Heck, he even offer a solution to the problem by asking her if a photo was okay. Can you imagine if he stopped to record something for her, then another fan saw it, and he was forced to do a video with them, and then another fan…you get the picture. He might be there all night.

Malek walked the red carpet on Tuesday night at the premiere of Bohemian Rhapsody, and of course the reporters had to ask him about the viral clip…