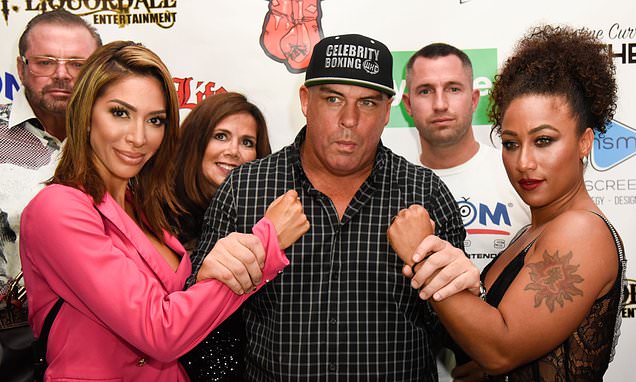 I KNEW IT!  Farrah Abraham is backing out of her boxing match against Nicole “Hoopz” Alexander with just one week Left (VIDEO)

I knew Farrah was going to find a reason not to step in the ring with Hoopz. Did you see that video of Hoopz training? Farrah was about to get a face lift!!

Farrah claims that the promoter is not living up to his end of the bargain, so with just 1 week left, she is backing out. The promoter, Damon Feldman, allegedly agreed to pay for Farrah’s hotel and fight tickets for her and her family.

However, Farrah claims, they never talked about, how many rooms and how many tickets, but it was assumed. When the numbers came in, Farrah would need 32 hotel rooms and 6 plane tickets and 24 tickets to the fight. To you and I, that sounds like a lot, but is it really? Of course Feldman could negotiate that down, knowing he had to do the same for Hoopz, but this is something that should have been specified in the contract and it just wasn’t.

Just when I was about to side with Farrah, TMZ claims they spoke with Feldman and they said that it was never specified in the contract that she would get accommodations for friends and family. It was specified because that wasn’t part of the agreement. In fact they said that Farrah came in with these crazy demands just last week. Feldman even provided proof that he booked Farrah first-class tickets for her and her daughter. He said he also got hotel rooms.

Both Feldoman and the fights investor Samantha Goldberg warn Farrah that there are severe consequences if she backs out for reasons that are not injury related. Now Farrah has to make a choice, does she want to fight in court, or just face Hoopz and catch those hands?

WATCH NOW: The Best of the Worse of Farrah Abraham