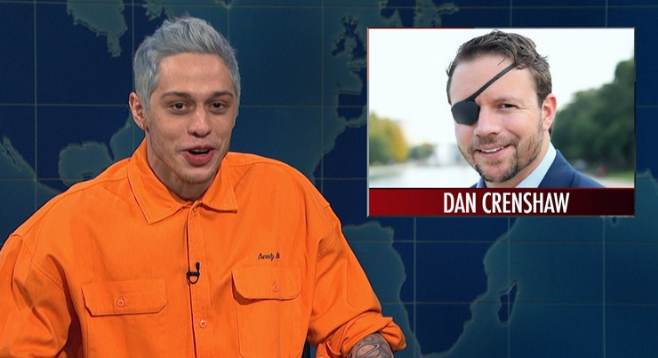 SNL’s Pete Davidson faces backlash over a joke about a veteran congressional candidate who lost an eye serving in Afghanistan. pic.twitter.com/zGJBxTsCZ6

Pete Davidson and Ariana Grande ended their engagement a few weeks ago, and it’s already clear who is coming out on top. Ariana released her new song, ‘Thank U, Next‘ a few days ago and it’s blowing up. The song is all over the freaking place. It’s safe to say it’s a certified hit.

Meanwhile, Pete has been striking out. After getting dragged online by Ariana for a joke he made during a promo for SNL, Pete is getting dragged again for a different joke.

On the most recent episode of Saturday Night Live, Pete mocked several political candidates based on their physical appearances. One of his targets was a Republican congressional candidate from Texas named Dan Crenshaw. He lost his eye while serving with the U.S. Navy SEALs in Afghanistan in 2012.

It was a bit of a reach, and honestly…not that funny even if you’re reaching with it. The audience didn’t really laugh, and so Pete kinda bailed on the joke by saying, “I’m sorry. I know he lost his eye in war or whatever.”

This obviously pissed a lot of people off. He came across as disrespectful to some, and even his co-star Kenan Thompson admits he may have went too far. Kenan was on the Today show on Monday, and he talked about the joke.

“My father is a veteran—you know, Vietnam—and I personally would never necessarily go there. But it’s tough when you’re fishing for jokes. Like, that’s how stand-ups feel. Like, there’s no real filters out there when they’re trying to go for a great joke or whatever. We try to respect that. But, at the same time, when you miss the mark, you’re offending people. So, you have to kind of like be a little more aware, in my opinion.”

“He definitely missed the mark,” @officialkenan on the backlash Pete Davidson is facing after he joked about a veteran congressional candidate on SNL. pic.twitter.com/hBZbsTCLU6

What do you think? Is Kenan correct? Did Pete cross the line? I think the joke could have worked if it was actually funny. As always, if you’re crossing “the line” with a joke, YOU HAVE TO MAKE SURE IT’S HILARIOUS! If you’re unsure, toss that sh*t out. It’s not worth it.