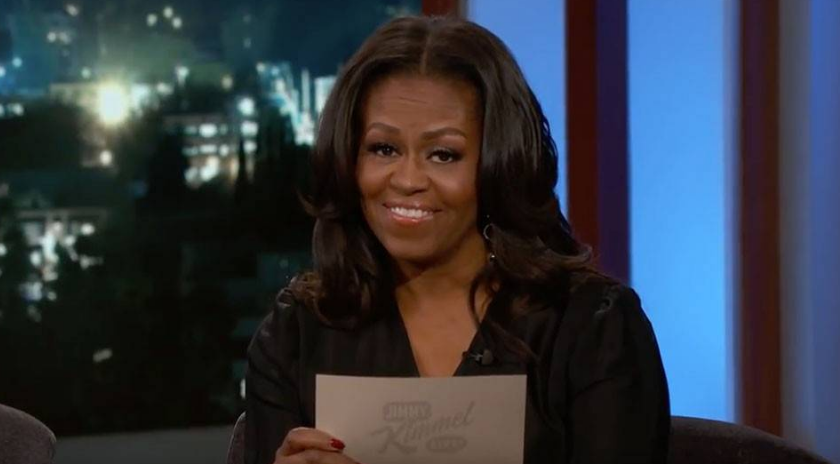 Michelle Obama Jokes That George Clooney Is Her Freebie, Reveals You Gots To Pay For White House Food (VIDEO)

Michelle Obama has been in the headlines recently after appearing on multiple talk shows. The former First Lady went on Jimmy Kimmel Live! the other day, and she was having herself a good ol’ time.

During the interview, Kimmel gave her a stack of cards and said, “You’re not first lady anymore and as far as I’m concerned you can cut loose and really say anything now, right?”

So he instructed her to read what was on the cards out loud, and since she’s a good sport, she went along with it.

Here are the four things Kimmel had her say:

The whole eight years we were in the White House, we used Laura Bush‘s password.

[George] Clooney is my freebie.”

I think George Clooney is everyone’s freebie. I don’t even like dudes, but my girl was like, “If you see Clooney, promise me you’ll f**k him for me,” and you know I don’t like to disappoint.

Later in the interview, Michelle revealed something pretty interesting about the White House. Obviously, the First Family doesn’t pay for rent or staff, but oddly enough, they do pay for their food…

“Rent is free, staff is free—we shouldn’t be mooching off of the taxpayers. They let you get whatever you want, like if you say you want some exotic fruit…and then you get the bill for a peach and its like that was a $500 peach! I would tell Barack, ‘Barack, do not express pleasure for anything unless I know how much it costs.'”

Damn. A $500 peach? F**k that. Someone better run down to Costco and get me two boxes full of assorted berries for five bucks.