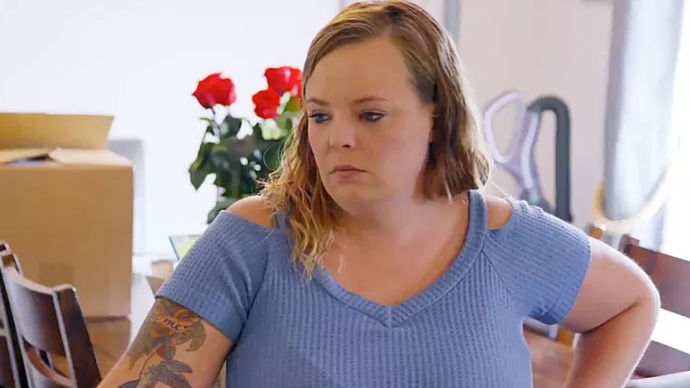 We were all waiting for Tyler Baltierra to end his marriage with Catelynn Lowell. The OG ‘Teen Mom‘ couple are one of the only ‘16 & Pregnant‘ couples who are still together.

But they’re just barely together.

If you’ve been watching the most recent seasons of ‘Teen Mom,’ then you know Tyler has not been happy for a long time. It almost looks like he despises Catelynn, most likely because she kinda checked out on life for two years. She spent most of last year in rehab, leaving Tyler to take care of their daughter alone.

You see, Catelynn loves to play the victim card, and that’s just super draining in a relationship. Tyler probably feels like he can’t truly express his feelings because he’s scared he’ll hurt her. That’s a lot to hold in and it’s starting to boil over.

On the most recent episode of the show, Tyler and Catelynn revealed they are going to do a trial separation. Once construction on their new house is finished, they’re going to spend 30 days living separately.

Obviously, Catelynn was not happy about this…

“He decided he wanted to try and live separately for a month. I was devastated at first, but now that I started my own therapy, I’m more comfortable with the idea. No … you know … in that moment it did trigger me. It did bring up wounds. It was scary, it was sad, it was hurtful.

When people say they want to separate, they want to leave, it seriously does feel like somebody died. It’s bringing up the old wounds from the miscarriage, and that’s traumatic.”

You know, it’s interesting. Even I don’t feel like I can honestly write about this subject, because in the back of my head I’m like, “What if Catelynn reads this and it sends her to a darker place?” AND I’M NOT EVEN CONNECTED TO HER!

So I can only imagine how Tyler must feel. It’s a difficult situation to be in. In my extremely unprofessional opinion, Catelynn needs a different kind of therapy. She needs to enter a boot camp or something. She’s weak right now and is too comfortable with being the victim.

OWN YOUR LIFE, CATELYNN! YOU DESERVE IT! IT’S A BEAUTIFUL WORLD IF YOU LOOK LONG ENOUGH!