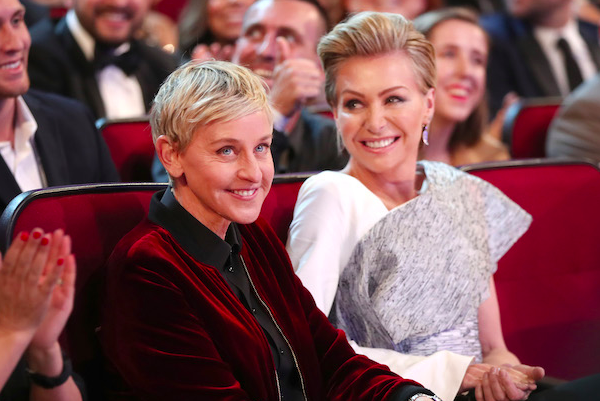 Ellen DeGeneres Is Thinking About Ending Her Daytime Talk Show In 2020…SHE’S TIRED OF PLAYING THE NICE GIRL!

Ellen DeGeneres started ‘The Ellen Degeneres Show‘ back in 2003. That’s a long, long, long time ago. Most normal people don’t even stay at one job that long. It’s especially rare in television, but Ellen is the queen of daytime TV, and it’s been that way for a while.

But now she’s thinking about throwing in the towel. During a rare interview with The New York Times, Ellen was able to reveal her true self a bit. The side of her we don’t get to see because she has to be super PG on her show.

During the interview, the 60-year-old comedian admitted she was close to declining the offer she received in 2016. Her new contract ends in 2020 and it’s looking like she will not renew it, but it depends on who she is going to listen to: her wife? or her brother?

Her brother believes she can never give it up, but her wife Portia de Rossi disagrees…

“The comedian and host reportedly is torn between advice given to her from two significant people in her life. ‘She (de Rossi) gets mad when my brother tells me I can’t stop.’ De Rossi, meanwhile, told the Times that she believes her wife has ‘other things she could tackle.'”

Other things like her stand-up career, perhaps? As some of you may know, Ellen is about to release her first comedy special in 15 years. In the ‘Relatable‘ special, Ellen is able to show more of herself. Her real self. The self that says “f**k” and “sh*t” and doesn’t feel like dancing all the f**king time.

Tig Notaro co-directed this special, and she also talked to The New York Times…

“Being trapped in the world of being asked to dance and expected to be nice, it’s real. I’m sure there’s people who think she’s kidding. Or can’t have a bad day. But she does. It’s an interesting pickle she’s in.”

You can check out the “real” Ellen when Netflix releases her comedy special December 18.