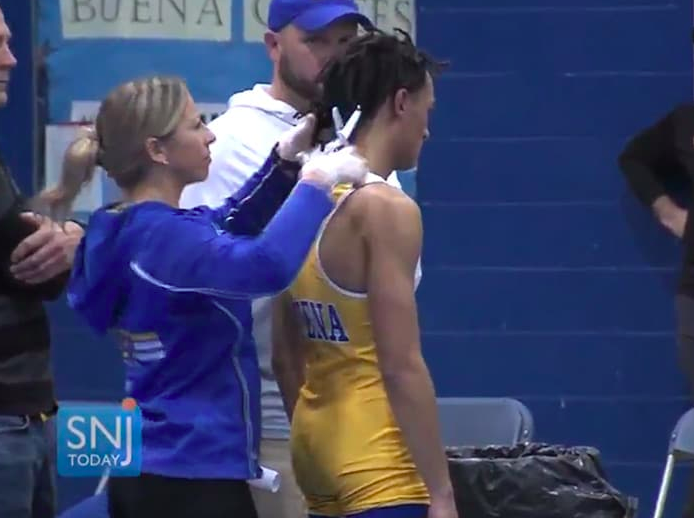 Epitome of a team player ⬇️

A referee wouldn’t allow Andrew Johnson of Buena @brhschiefs to wrestle with a cover over his dreadlocks. It was either an impromptu haircut, or a forfeit. Johnson chose the haircut, then won by sudden victory in OT to help spark Buena to a win. pic.twitter.com/f6JidKNKoI

A high school wrestler named Andrew Johnson was set to kick off his match for Buena Regional High School in New Jersey when referee Alan Maloney stepped in.

Maloney told Johnson that he had to cut his locks or forfeit the match. The referee claimed the cover Johnson was wearing was not sufficient, which is most likely bullsh*t because Johnson has presumably been wrestling all year and it hasn’t been a problem.

To make matters worse, Maloney has a history of racist behavior. He used a racial slur toward a black man during a social gathering in 2016 and got his a** kicked for it. Maloney later apologized for the incident and was forced to take a sensitivity training class, but obviously that didn’t make his hate go away.

Johnson’s coach argued with Maloney for several minutes, but when Maloney started the injury time clock, Johnson had to make the tough decision. Not wanting to let his team down, he cut his hair and went on to win the match easily. You could tell how upset he was, though. When the ref raised his hand in victory, he immediately dropped it and walked away to his team.

The NJSIAA has released a statement, .

“The NJSIAA has been in direct contact with school officials and is now awaiting official incident reports. A report also has been requested from the referee involved. In addition – and as per its formal sportsmanship policy – the NJSIAA has provided initial information to the New Jersey Division on Civil Rights and will continue to send updates as they become available.”

“At this point, the NJSIAA is working to determine the exact nature of the incident and whether an infraction occurred.”

“As a precautionary measure, given the degree of attention being focused on this matter, the NJSIAA will recommend to chapter officials that the referee in question not be assigned to any event until this matter has been reviewed more thoroughly in order to avoid potential distractions for the competing wrestlers.”

How about the team rally around the player so he doesn’t have to cut his f*ckin hair. Why should he have to make the sacrifice? I’ll tell you why, because he knew if he didn’t he would be seen as another selfish N**ga. The sad part is someone will find another reason to call him that anyway.