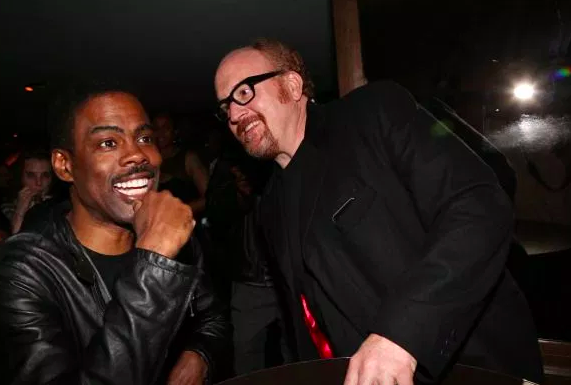 People Are Freaking Out Over An Old Clip Featuring Louis C.K., Chris Rock and Ricky Gervais Using The N-Word (VIDEO)

If you’re a comedy fan like me, there is a good chance you’ve already seen the video below. In 2011, during a HBO special called ‘Talking Funny‘ comedians Louis C.K., Chris Rock, Ricky Gervais and Jerry Seinfeld discussed everything comedy. It was a pretty entertaining conversation between some comedy legends.

But during one part of the conversation, Rock talks about how Louis is the blackest white guy he knows, adding that he has all the “negative” qualities that go with it. That’s when Louis chimed in with, “So you’re saying I’m a…” you can add the rest there. I WON’T EVEN TYPE IT AND HERE LOUIS IS JUST THROWING IT AROUND ON TV!

And to make matters worse, after Louis said it, Gervais said it! The only person who didn’t say it was Jerry Seinfeld, and believe it or not, Seinfeld actually called Louis out. He said, “I don’t think he can do that,” and that’s when Rock jumped in and defended Louis saying he could indeed do it.

Later in the clip, Seinfeld reveals he has never said the n-word and added, “I’ve never found the humor in it, nor do I seek it.”

As we mentioned above, this clip has been around for seven years, so it’s a little odd to see it being spread now. But that doesn’t change the fact that Louis, Rock and Ricky were throwing around the n-word like candy at a parade.

Heck, Wayne Brady is even mad at Seinfeld because he feels like he didn’t do enough…

What do you all think?