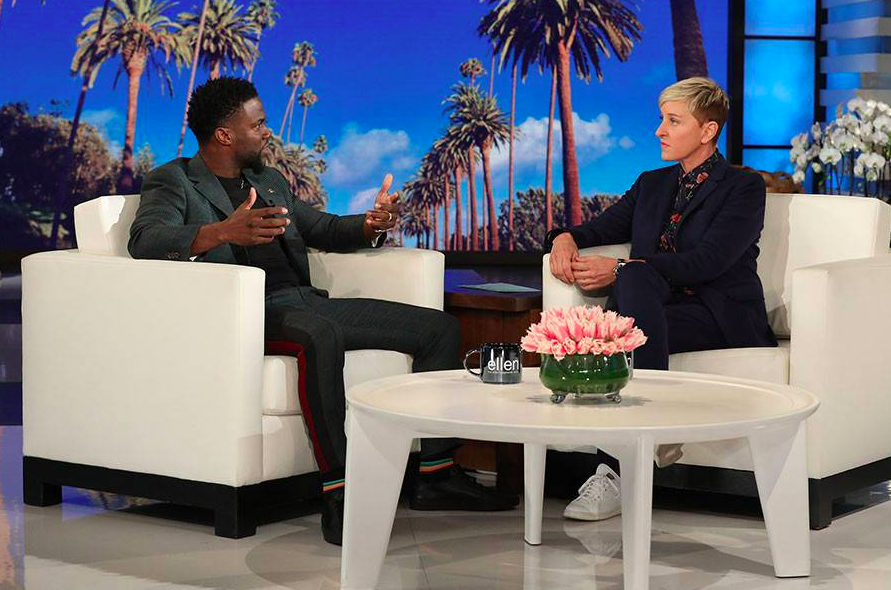 Well, damn. Ellen DeGeneres just went out there. On the Friday episode of her daytime talk show (you’ve probably heard of it) she had Kevin Hart on, and as you all know, Hart has been in the news the past month or two. He was set to host the Oscars only to be called out for anti-gay jokes he made years ago. The Academy was like, “Yo, Kevin. We still want you to host, but you have to apologize.”

Hart refused to apologize a second time for his comments, so he decided it would be best to step down as the host. The Academy still hasn’t found a new host, but it’s clear Ellen believes it should still be Hart.

During the show, he spoke at length about his decision, then they went to a commercial break. After they came back, Ellen revealed she actually called The Academy herself to throw her support behind Hart…

“I called The Academy today, because I really want you to host the Oscars. I was so excited when I heard that they asked you. I thought it was an amazing thing. I knew how important it was and how it was a dream. So, I called them. I said, ‘Kevin’s on. I have no idea if he wants to come back and host, but what are your thoughts?’ And they were like, ‘Oh my, God! We want him to host. We feel like that maybe he misunderstood or it was handled wrong or maybe we said the wrong thing, but we want him to host. Whatever we can do, we would be thrilled and he should host the Oscars.’ The Academy is saying, ‘What can we do to make this happen?’ And I’m saying to you, as one of the smartest people I know, one of the funniest people I know…what we’re going to get to see onstage with you hosting the Oscars is sophistication, class, hilarity and you growing as a person. Because most people would say, ‘I’m walking away. I’m not coming back.'”

After clips of the interview were released online, people started coming after Ellen, which is not something she has experienced in the past 20 years. She’s always been loved by everyone.

Several people tweeted her to let her know they were disappointed in her. One of the more popular tweets came from Buzzfeed “reporter” Adam Vary…

“(1) First, the people who brought up Kevin Hart’s past tweets — like me — were not, as Ellen characterized, ‘haters.’ The host of the Oscars had made anti-gay jokes, and LGBT people who love the Oscars were legitimately startled to see just how harsh his words were. It wasn’t a…(2) …mob of people out to get Kevin Hart. It was a group of people who wanted to understand Hart’s thinking about those hurtful tweets & his stand-up jokes.”

“I am so pissed about this. And Ellen amplifying it only makes it sting more.”

That being said, there are also a lot of people supporting both Ellen and Hart. At this point, I think the solution is obvious. Both Ellen and Kevin need to host the Oscars together.