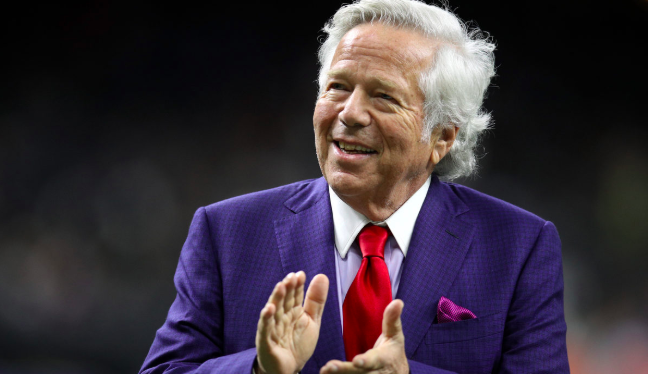 Robert Kraft and the rest of the New England Patriots franchise were riding high after another Super Bowl victory earlier this month. They were the champions in 2015, 2017 and 2019. It’s been a magical run for the team.

But the celebration is coming to an end for owner Robert Kraft. Cops have issued a warrant for his arrest as part of a recent prostitution/human trafficking sting in Florida.

Police say the 77-year-old billionaire will be charged with soliciting another to commit prostitution. According to the reports, he’s been accused of soliciting a prostitute on at least two different occasions a month ago.

Cops say they have obtained evidence from body cam video and surveillance that has been conducted over the last several months. Officials say Kraft was driven to the spa by a chauffeur. The average cost per visit for services is $59 or $79 per hour, according to police.

$59 per hour? Damn. Go cheap on your clothing or groceries Kraft, don’t look for deals in the prostitution market. Did he find them on Groupon?

Like we mentioned above, this dude is a billionaire. He could build his own personal sex robot. Or he could do what most old billionaires do, he could become a sugar daddy. And it looks like he was doing that. He had been dating 39-year-old actress Ricki Noel Lander since 2012.

I guess she was getting to be too expensive. Kraft will be charged with a misdemeanor and is set to appear in court soon. For what it’s worth, a spokesperson for Kraft claims he’s completely innocent…

We categorically deny that Mr. Kraft engaged in any illegal activity. Because it is a judicial matter, we will not be commenting further.

We’ll keep you posted as the story develops.