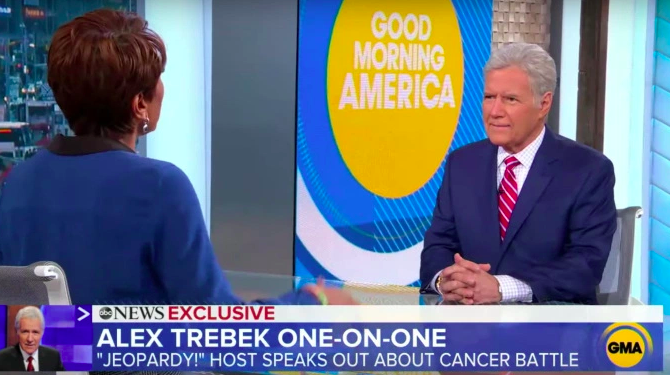 ‘Jeopardy‘ host Alex Trebek has been putting on a brave face ever since revealing his stage four pancreatic cancer diagnosis a month or so ago. He’s made a few short videos addressing the news and promising to be back for another season of Jeopardy. He appeared to be in good spirits.

But during a recent interview with Good Morning America’s Robin Roberts, Trebek admitted it hasn’t been easy.

I’ve had kidney stones, I’ve had ruptured discs, so I’m used to dealing with pain. But what I’m not used to dealing with is the surges that come on suddenly of deep, deep sadness and it brings tears to my eyes. I’ve discovered in this whole episode, ladies and gentlemen, that I’m a bit of a wuss. But I’m fighting through it.

The good news is that even if he’s not exactly feeling his best, his doctors says he’s doing great so far. His weight, blood count and platelets are all steady and his cancer indicators are going down.

But still, it’s going to be a long road. Pancreatic cancer is one of the worst ones out there, especially at stage four.

The chemo takes it out of you. I feel so weak all the time. We are dealing with it chemically and spiritually and those are positives. Hopefully everything is going to turn out well and I’ll be back on the air with original programming come this September.

In spite of the fact this diagnosis is not a good one, I have managed to receive so much love from so many people and quite often you don’t get that during your lifetime…It makes me feel really, really good.

Here’s to hoping he can beat the odds! Our thoughts and prayers go out to him and his family.