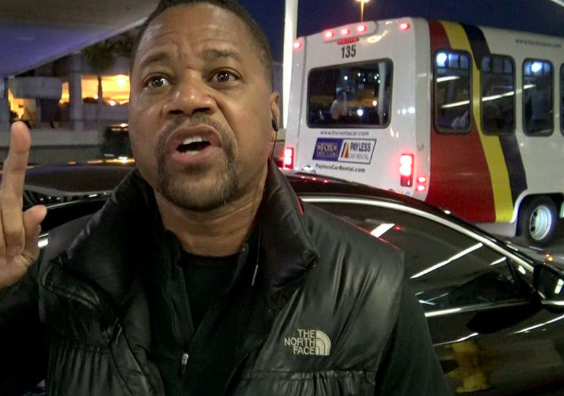 Yesterday we told you that a woman at a bar in New York City accused Cuba Gooding Jr. of groping her breasts. If you missed the article, you can click on this link. We included a video that shows Cuba at the bar.

He was drinking, performing karaoke and talking to everyone who would listen. You could also see him having some sort of disagreement with a woman. We’re still not sure if the woman in the clip is the alleged victim, but it would make sense.

The woman claims after she gave Cuba a glass of water, he touched her boobs without asking. They started arguing, and the woman called the cops nearly two hours later after Cuba had already left.

Now he’s facing a misdemeanor charge of forcible touching, and he’s expected to turn himself in on Thursday. TMZ cameras spotted him about to board a flight to NYC from LAX on Tuesday, and they asked him what happened.

Cuba says the claim he grabbed a woman’s breast Sunday night at Magic Hour Rooftop Bar & Lounge in Manhattan … is absolutely untrue. He says he was there partying with friends, and posed for pics with fans, but says no one was touched inappropriately … not even by accident. He says there’s also surveillance video that will show he’s innocent.

And he also tried to deflect by talking about Jon Stewart’s dismantling of congress, which is a good play on his part.

We ain’t even mad at him, ’cause everyone should watch the Stewart video.

If you haven’t watched it yet, check it out below. It’s an instant classic…