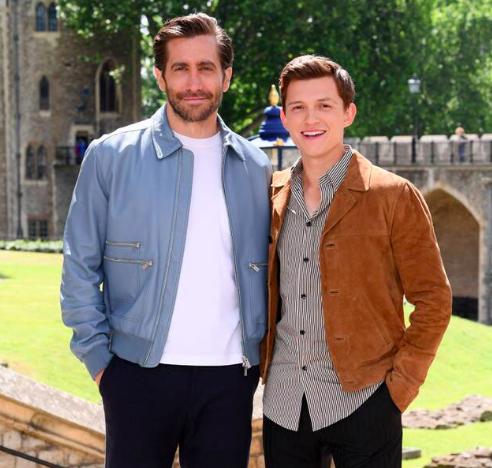 Do you have a gym buddy? If so, it’s likely your gym buddy is in worse shape than you. It’s just natural. We want to outperform everyone.

Spider-Man, aka Tom Holland, is the same way. While in China doing press for the upcoming Spider-Man: Far From Home, he decided to workout with his co-star Jake Gyllenhaal.

“I didn’t want to go because Jake Gyllenhaal is ripped, and I’m really competitive,” Holland told Stephen Colbert on The Late Show.

He explained that after just warming up their abs and legs that he was “roasted” and wanted nothing more than to sit down. But Jake wanted to keep going, and suggested they run a quick mile on the treadmill.

I’m like, ‘A mile? Are we pressed for time? C’mon, let’s do two.’ So, Immediately I’m regretting suggesting doing two miles….And there’s, like, a law in the gym that you can’t run slower than the guy next to you. You just can’t.

A few minutes in, Holland is ready to crash, but he can’t let Gyllenhaal win. At around 4 minutes in, Gyllenhaal says, “Tom, this is too easy, let’s up the incline.”

Holland agreed to do up the incline, and he paid for it later while doing an interview. The reporter noticed Holland could barely walk.

Genuinely, I’m sitting there and a journalist goes, ‘What’s wrong with you?’ I said, ‘Well, I do all of my own stunts.’

He doesn’t though. He just tried and failed to workout with the great Jake Gyllenhaal. He’s a better man than me. I would have tapped out after having to open the heavy door to get inside the gym.