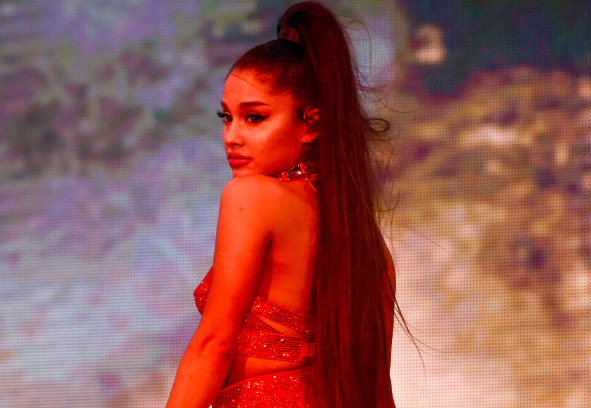 Ariana Grande Breaks Down During Concert, Cries While Trying To Perform And Her Fans Are Worried! (VIDEO)

Does Ariana Grande need an extended vacation? That’s what her fans believe after she was spotted crying during a concert in St. Louis on Saturday.

A fan posted the video you see above, which shows Grande struggling to sing her ‘R.E.M.’ song from her Sweetener album. In fact, her fans did most of the singing for her as she cried onstage. It was obviously an emotional moment for Grande.

And it makes sense, considering the past year has been an extremely emotional one for Grande. She got engaged to Pete Davidson, only to break up with him months later after struggling with the death of her former boyfriend, Mac Miller. She was clearly still attached to Miller emotionally, so his death has been really hard on her.

After fans shared the clip online and sent out their messages of love and support to Grande, the 26-year-old singer sent out a lengthy statement explaining that she feels everything deeply…

I feel everything very intensely and have committed to doing this tour during a time in my life when i’m still processing a lot … so sometimes i cry a lot! I thank you for accepting my humanness. i’m not sure what i did to deserve to meet so many loving souls every night / to feel so much love, but i want you to know that it really does carry me through. i feel it and appreciate it. and all of you show much.

This Sweetener World Tour is going to keep her busy all year. She’ll end the first leg on August 4, and then enter the second leg in Europe on August 17. From there, she returns to the states in late October, and kicks off the third leg in New York in early November. Her final show is scheduled for December 21 in California.

Hopefully 2019 is a rest year for her. It feels like this year she tried to throw herself into work, which can work temporarily, but it’s obviously not a long-term solution.