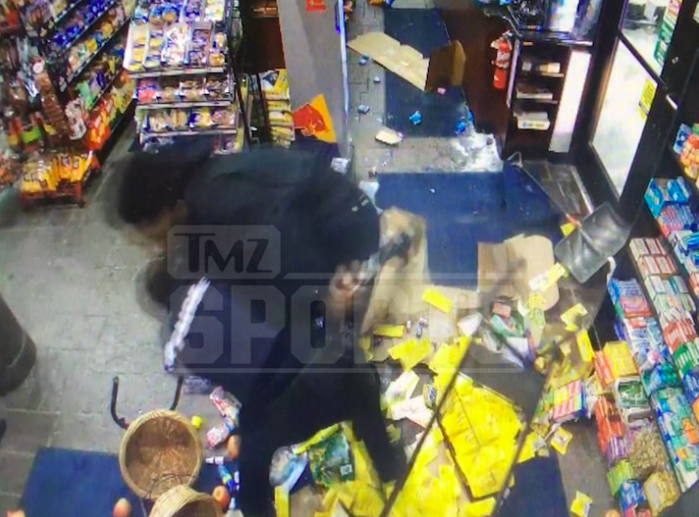 Geez. 23-year-old NFL player Malik McDowell must have had an angel looking out for him back in February because people (black men especially) have been shot and killed for much less.

In the insane video you see above, McDowell gets pulled over for speeding. He was apparently driving 60 mph down a side road while it was snowing, which caused him to spin out. During the stop, McDowell got out of his vehicle and refused to give his I.D. until he spoke to a supervisor.

As the officer continues to verbally engage with McDowell, who was selected by the Seattle Seahawks in the 2nd round of the 2017 NFL Draft, he tries to leave his vehicle and walk into the gas station convenient store.

The cop grabs McDowell and tells him to put his hands behind his back … but again, McDowell disobeys and begins to fight back against the officer, knocking over shelves of food in the process.

It’s at this point we should mention that McDowell is 6’6″ and around 300 pounds. We don’t know how tall the police officer was, but he looked pretty damn small compared to McDowell. If I’m being honest, I would have just left the scene had I been the officer. I know my limits. I’m not about to fight some giant.

But the officer was determined and eventually tased McDowell. Unfortunately, the taser wasn’t effective because McDowell was wasted with a BAC of .189, which is over two times the legal limit.

McDowell stood up once again and dragged the officer around the store. Eventually though, McDowell started to get tired and the officer was able to take his back just as another officer arrived on scene to help. At one point, it looks like McDowell reaches for the responding officer’s gun, but he was so wasted it’s hard to know what he believed he was doing.

McDowell was eventually charged with 2 counts of felony assaulting and resisting, 1 misdemeanor count of operating while intoxicated and misdemeanor driving on a suspended license. McDowell was arraigned back in May — but he’s due back in court later this month.

It’s pretty sad because McDowell is a very talented football player, but because of his legal troubles and a concussion he suffered during an ATV accident, he was released by the Seahawks in 2018.

He’s currently a free agent and just recently had a meeting with the Dallas Cowboys.