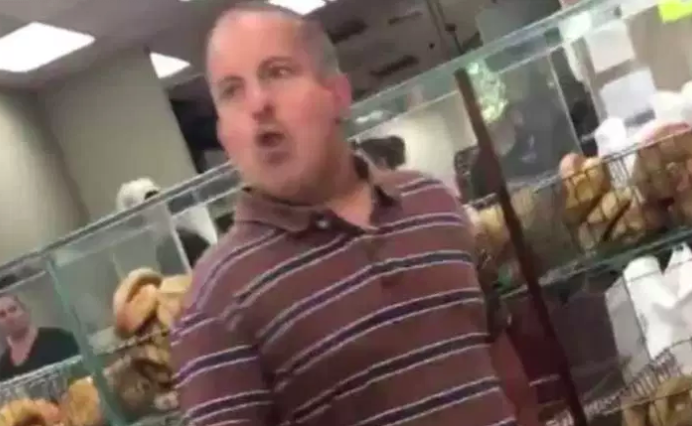 THE ANGRY BAGEL TROLL SPEAKS! Says He Doesn’t Trust Women And Uses The N-Word When He Feels It’s Appropriate (VIDEO)

so in bagel boss this morning, the misogynistic douchebag seen in the video was degrading almost all of the female staff as well as other patrons. fuck this guy. pic.twitter.com/LZh1Uk4UXZ

This week blessed us with one of the greatest/saddest public meltdown videos of the year. You’ve probably already seen the video, but if you haven’t, you can check it out above.

The short man you see in the video is Chris Morgan, and he stands at 5’0” tall. And when you’re that short as a man, you’re going to feel a little defensive at all times. It’s natural. I’m pretty sure there are studies out there that confirm taller men get treated with more respect in the workplace.

So yeah, it makes sense that this Morgan dude is so angry, but at the same time, it’s his sh*tty attitude that makes him unappealing to most women. If he was a funny, loving and respectful dude, he could probably find someone to love him. THERE IS SOMEONE FOR EVERYONE! But in his current mental state, he’s only going to attract eye rolls and giggles.

TMZ cameras caught up with Morgan and they basically did a mini-interview. According to Morgan, he got pissed in the bagel shop when one of the employees started laughing at him. Now who knows why (or even if) she was laughing at him, but because of Morgan’s defensive demeanor, he took it the wrong way.

He called the employee out, and that’s when the customers (or bullies as he calls them) came to her defense.

The cameraman also asked Morgan if he would consider himself to be a misogynist. Morgan didn’t even know what the word meant, but once explained, he kinda agreed. He also admitted to using the N-word in certain situations, but said he’s not a racist because (wait for it) he has black friends.