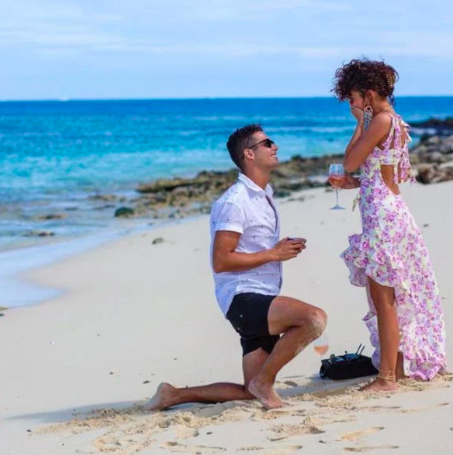 We all know celebrities love watching The Bachelor, but some of them REALLY love watching it. ‘Modern Family‘ star Sarah Hyland basically fell in love while watching Wells Adams on Bachelor in Paradise.

In October of 2017, a little over a year after Adams’ appearance on Bachelor in Paradise, it was confirmed that he and Hyland were dating.

They have been inseparable ever since, and on Tuesday (July 16), they announced to the world that they were engaged. Hyland shared multiple photos from the beach proposal, and Adams shared an adorable video.

This engagement isn’t exactly surprising. Adams moved in with Hyland inside her Los Angeles home back in July of 2018 and in September of 2018, Wells was imagining what their wedding would be like during an interview with Us Weekly…

My family would be involved and they would ruin the entire experience because they’re crazy. They would have too much fun at the wedding and that would be a whole other story. [Bachelor host] Chris Harrison would kick my brother out of a part and be like, ‘You’re too drunk, you need to leave.’

We’ll see if his nightmare becomes a reality. No word on a wedding date, but no doubt they’ll have a lot of people who will want to come.