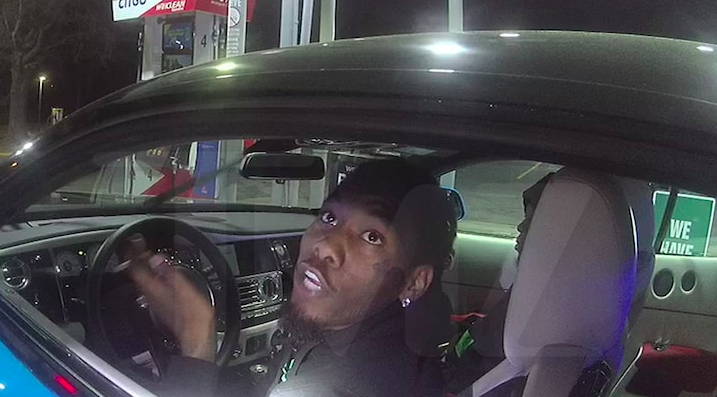 Officer In Georgia Pulls Over Offset For Speeding, And The Whole Interaction Was Pretty Damn Awkward (VIDEO)

Back in March, Offset was pulled over in Sandy Springs, GA, which is just outside Atlanta. He was slapped with a few tickets, one for speeding and one for failure to maintain his lane.

The cop also wanted to give him a ticket for obstruction of his tags, but he decided to be nice and only give him a warning.

The bodycam footage from the stop was just released, and it’s pretty awkward. You could tell Offset was pissed from the start. He asked the officer if he could turn off his flashlight, but the officer refused, we’re assuming for his ~safety~ or whatever.

From there, Offset asks the officer why he pulled him over. When the cop told him he was speeding, Offset didn’t buy it because he didn’t actually catch him with a radar gun.

The 27-year-old rapper also suggests the cop only pulled him over because he was mad about his nice car, “I don’t care about your car,” the cop laughs. Offset ended things by saying the officers kids would be disappointed in him.

Oh and Offset claimed he was going to fight the tickets in court, but when his court date came, he didn’t show up. He had to pay $470 in fines and $100 for missing a hearing in the case.

Honestly, watching the video, the cop seems fairly chill. If Offset turned on some charm, he might have wiggled his way out of at least one of the tickets.

But hey, I can understand why Offset was on edge. It’s just the world we live in. Cops shouldn’t be a source of fear for so many, but unfortunately because of their racist behavior and lack of accountability, they are.