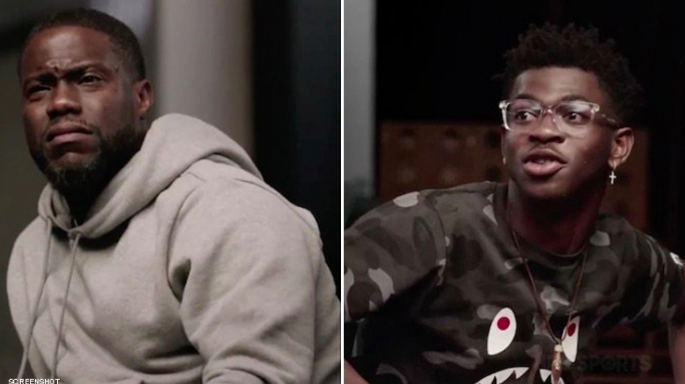 Kevin Hart Is A Fool, Acts Like He Has No Idea Why Lil Nas X Was Afraid To Come Out As Gay (VIDEO)

.@lilnasx speaks the truth about his choice to come out while at the top. More of The Shop on @HBO now! pic.twitter.com/wETNaPUU5t

Let me first start out by saying…continued prayers up for Kevin Hart. As you all know, he was in a serious car accident this past weekend and had to have back surgery. Hopefully he makes a full recovery and is able to joke about it in his next stand-up special.

That being said, the dude is shady as hell sometimes. No, we’re not talking about the suspicious activity surrounding the car accident, though you can read about that by clicking here.

We’re talking about his recent appearance on HBO’s The Shop: Uninterrupted. The show is produced by LeBron James and features a roundtable-like discussion between actors, comedians, athletes, musicians, etc.

During the episode, Lil Nas X was asked about the big announcement he made on Twitter and why he felt it was important to announce it. Before he could answer, Hart yelled, “He said he was gay! So what?”

Lil Nas then explained how it was important for him to come out while he was at the top. He wanted to fight the anti-gay sentiment, “I’m growing up to hate that sh*t,” he explained.

That’s when Hart interrupted him once again. Hart seemed shocked, “Hate what? Why?!?” He asked, nearly falling out of his high chair.

“If you’re really from the hood, you know,” Lil Nas replied, obviously referring to the homophobia that’s present in portions of the black community.

Any other time, like, I’m doing this for attention in my eyes. But if you’re doing this while you’re at the top, you know it’s, like, for real. It’s showing, like, it doesn’t really matter.

That’s a great answer. Respect to him. But Hart? Come on, man. Look. Obviously I don’t think Hart is homophobic; however, I do believe he likes to play dumb when it’s convenient for him to do so.

I mean, he lost his hosting gig at the Oscars because he joked (a long time ago) about beating up his son if he found out he was gay.

YES IT WAS JUST A JOKE, BUT WHERE DID THAT JOKE COME FROM?

He’s trying to play dumb on this show, “Whaaat? Why would you feel that way growing up?” You know why! Just sit back and listen.