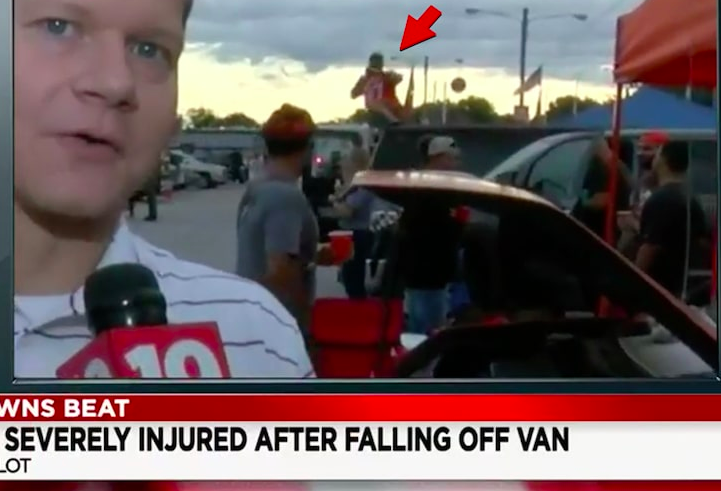 If you were watching Cleveland 19 News this weekend, then there is a good chance you saw something pretty bizarre happen.

The news station had a reporter broadcasting live from the parking lot of the stadium documenting the tailgating experience for people at home who couldn’t make it.

During their broadcast, a Browns fan fell off the top of a van and smashed his head against the concrete. You can see the frightening fall in the short clip below…

He is sitting up and responsive. Multiple EMS techs are speaking with him and treating an injury to the side of his head. Ambulance waiting. @cleveland19news https://t.co/ZC813c6Kq7

That was painful to watch, eh? The most shocking part of the video was how no one seemed to care at first. You see that one dude in the front look at him briefly, and then just continue walking like he didn’t see a damn thing.

Thankfully, paramedics were called to the scene and it was determined the 40-year-old man had a seizure, which caused him to collapse and fall off the van.

The man’s son says his father is still in the hospital recovering from a broken shoulder, a few broken ribs and a fractured skull. He also has a blood clot. He needs surgery, but he’s expected to make a full recovery.

To make matters worse, the Browns lost big to the Tennessee Titans, giving up 21 points in the 4th quarter of the game.