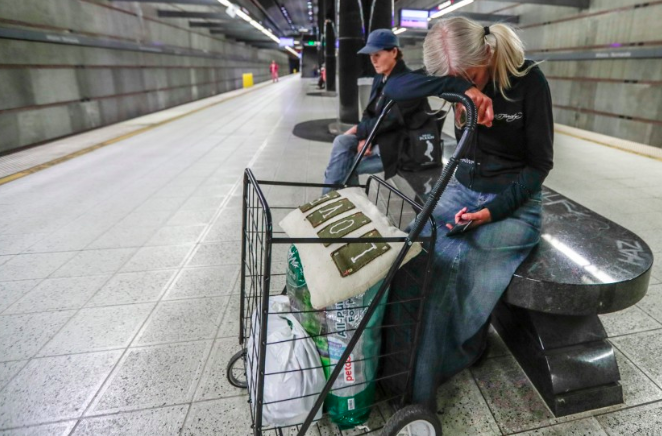 Some uplifting news to report this Wednesday morning, a 52-year-old homeless lady named Emily Zamourka is seeing her life completely change in just a few days after going viral online.

It all started when a LAPD officer saw her in the subway and asked to record her singing. At first, she declined, but then eventually agreed if he promised not to post it online.

The officer obviously broke his promise, but we’re sure Zamourka doesn’t mind at this point. The Russian-born subway singer went viral with her beautiful voice. In just a matter of two days, Zamourka has become an internet celebrity.

Strangers are asking her for photos in the subway, the LA Times did a profile on her, over $48,000 has been raised for her to help with her housing, and she was offered a recording contract from Grammy-nominated music producer, Joel Diamond.

Joel’s drawn up an offer letter for the Russian-born subway singer, with the hope of creating a ‘huge classical/EDM crossover hit record for the subway soprano.’ The deal would be for one initial record entitled ‘Paradise’ … which would be released on Diamond’s label, Silver Blue Records.

No word on if Zamourka is planning on accepting the offer, but we’re sure it won’t be the only offer coming her way. She’s got a very nice voice, plus an incredible story, which is all you need sometimes to make it big.

What’s interesting is that in the video, it almost seems staged, right? She looks like an actress playing a homeless person in some Broadway musical, but her story is real.

She was living in Washington several years ago, doing okay for herself by providing piano lessons for over 60 kids. But then, she got sick, her pancreas and liver began to fail.

Friends from Russia helped her find a hospital in Los Angeles, and she said after being admitted, she required feeding tubes during treatment from December 2007 to April 2008.

Zamourka had applied for political asylum and became a legal resident in 2008. When she was well enough to work again, she returned to teaching music — this time from a Glendale apartment a friend helped pay for. But unlike her Washington job, she said, she had fewer clients who were less consistent in their lessons, so she began to play the violin on the streets for extra cash.

After her violin was stolen and her friend died of a heart attack, Zamourka was forced to live on the streets.

It looks like her time on the streets is coming to an end though. In just two days, her life has forever been changed.