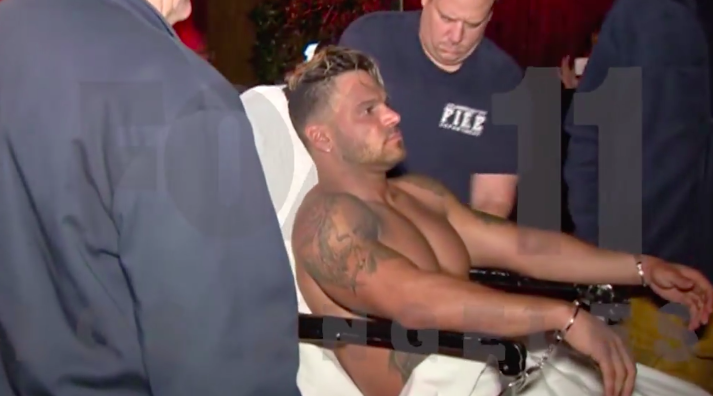 Ronnie Ortiz-Magro has always been a major douche with anger problems. We knew all this from the very first season of ‘Jersey Shore‘ but for some reason, people still support his stupid a**.

But hopefully the bizarre support behind him will come to an end after his latest hulk session.

Ronnie and his girlfriend/baby mama Jen Harley were renting an AirBnB in Los Angeles this week. They were in California to attend/celebrate his CBD launch party of VERGE. Early in the day on Thursday, Jen and Ronnie (who have a history of domestic abuse) were seen holding hands while walking around Beverly Hills.

And at his company’s launch party, he told reporters that he would like to have more kids with Jen…

I’m sure, eventually [I’ll have more kids], But I just want to spoil [Ariana] and let her go crazy and then we’ll see what happens.

And by “spoil” Ronnie apparently means holding Ariana while chasing her mother out of the house with a knife. Good times, right? What a lucky kid.

Ronnie was arrested in the early morning hours on Friday after allegedly getting high on coke and punching/slapping his girlfriend.

As we’ve seen in the past … the argument got out of hand quickly, because we’re told Ronnie allegedly slapped and punched Jen … who then went running out of the house, screaming for help. Police got multiple 911 calls reporting the fact Jen was in distress.

Our law enforcement sources say Ronnie gave chase … running after Jen, allegedly with a knife in his hand, and horrifyingly, also with their infant daughter! We’re told Ronnie was holding 18-month-old Ariana as he yelled at Jen to get back in the house.

IS THIS KID SPOILED OR WHAT? Damn. What an amazing life this little baby has. You sure know how to spoil a kid, Ronnie. What’s next? Are you going to teach her to strangle someone?

When cops arrived on scene, Ronnie had locked himself in the house with this spoiled brat. They were afraid for the child’s safety (which is weird because they were just having fun!) and decided to break the door down.

Once inside, they were forced to tase Ronnie, ’cause he was all jazzed up on coke.

Cops took Ronnie to a hospital to get checked out … and we’re told he will be booked as soon as doctors give the okay. Paramedics on the scene checked out Jen and the baby, and neither suffered major physical injuries. We’re told Jen did have visible marks on her face.

Good times. I’m sure his company will be a great success.